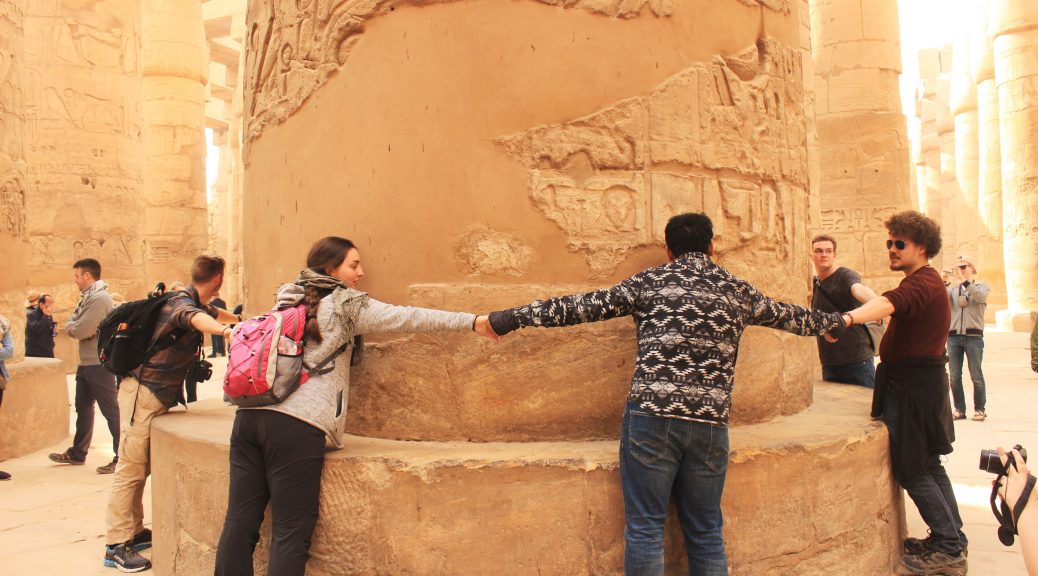 Since the end of the last blog post by my friend Silas, we’ve explored Egypt further. Since Anafora, we’ve spent a lot of time traveling out and about, flying from Cairo to Luxor and spending two days there with picturesque scenery along the Nile visible right from our hotel room windows and rooftop. Our guide, Samer, took us to explore several historical locations around Luxor – Karnak Temple, Luxor Temple, the Valley of Kings, and the local bazaar, to name a few.

After flying back to Cairo, we also had the opportunity to travel (once again, led by Samer) down to St. Catherine’s Monastery at the foot of Mount Sinai, some several hours’ bus drive where we crossed the Suez Canal into the Sinai peninsula (and from Africa to Asia). Touring the museum there was a fascinating experience, as well – many Christian icons, fine artwork, and old books, all of which were several centuries old, a few well over a thousand years old, which highlights the deep and rich history of the monastery in addition to Christianity itself.

One of the highlights of this week (and the trip to date) was our climb up Mount Sinai on the 23rd; not quite just a walk in the park, with a trail about 2.5 miles long with 750 steps at the end to the peak. It covers a total elevation change of 2,200 feet (with the peak itself being roughly 2.2km, or 7,500 feet, above sea level), but the sunset view at the peak was well worth the hike, in addition to Linford going on at length with several excellent words on Exodus (our assigned Bible reading at the time) and our hiking experience.

The day after our climb up Mount Sinai was a much more relaxed day (in the morning at least) where we drove from St. Catherine to Taba, a small town on the Egyptian side of the Egypt-Israel border, to cross through the very southern tip of Israel over to Aqaba on the Jordanian side, where we stayed the night. Clearing border security in Israel was a very time-consuming affair, but eventually we got across to Jordan, where we ended up waiting some more for our guides and bus. END_OF_DOCUMENT_TOKEN_TO_BE_REPLACED 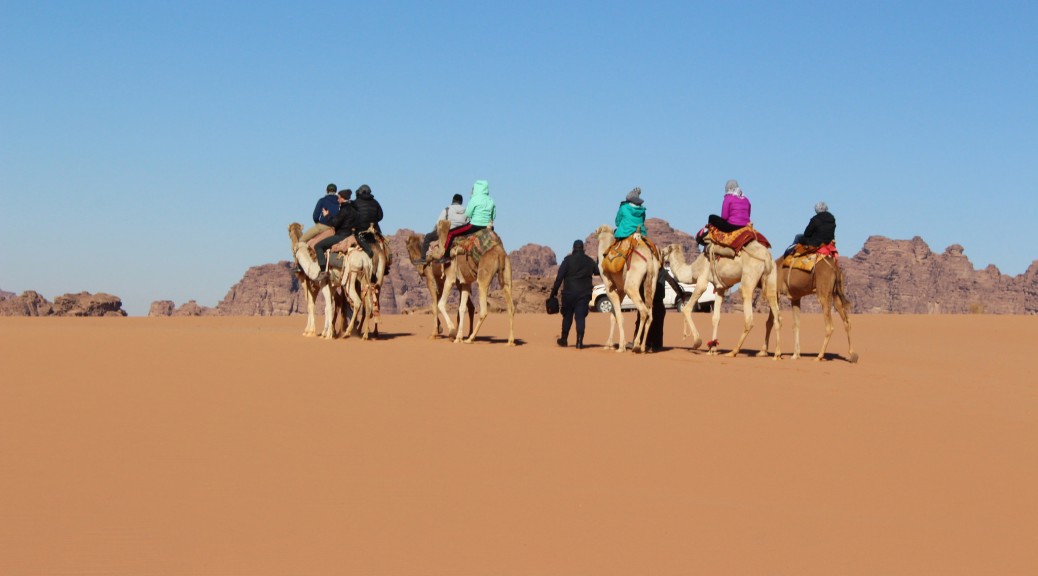 On Thursday, January 24 we arrived at Wadi Rum, Jordan after staying in Aqaba, Jordan for one night. What we had planned in Wadi Rum was a two night Jordanian Bedouin camp stay which included a three hour camel ride into the Wadi Rum desert. Once we arrived at the Bedouin camp we were able to choose our roommates, each tent was a double with the exception of one triple. My roommate was Michelle Mahia, who is a very good friend of mine. The Bedouin tents were not what I expected. When you are told you will stay in a Bedouin camp you expect to “rough it” (at least that was my initial thought) but these tents had indoor plumbing (toilet, shower, sink), indoor electricity which I believe is powered through solar power, beds, and even carpet inside. We were all so amazed at how incredible the tents were. After we settled down in our tents everyone went out to explore what surrounded us. Most people went to climb this huge rock that was behind the camp which gave you an amazing view of the area, while others walked into the desert to explore what else was out in the area.

The nights in the Bedouin camp were cold but not the coldest we’ve experienced. You definitely had to wear some extra layers going to bed. I wore a hat, gloves and two pairs of socks to bed apart from my usual sleeping attire. The next day, Friday, right after breakfast we had our camels waiting for us in front of the Bedouin camp. Most of the camels were sitting and ready for us.

Traveling constantly from place to place this past month has given me the opportunity to talk with lots of people but not truly get to know them on a deeper level past, “My name is Susanna and I come from the United States.” But the moment that Janaya and I stepped through our host family’s door, I knew that was not going to be the case with them. As soon as our host mom saw us she stated that she had three rules: we were to treat her house as our home; we were not allowed to be shy; and we were to speak in Arabic. She should have added a fourth rule that seems to be an unspoken one, which is to eat until you burst and then eat some more.

Food is their life, truly. Making and eating food is what they pour their energy into since there is little else to do for fun, and it is one of the few pleasures that is relatively unaffected by all of the constant changes negatively impacting their lives. They have good reason for the pride in their cooking and baking as each meal is a delicious cultural experience and history lesson. They talk about their food as old friends, calling it a particular name and then reminiscing when it would be made for different holidays. I had high expectations for food coming into this trip and I have not been disappointed whatsoever!

Home life is a constant reminder of how families are all together in spirit no matter how scattered they are around the world. Our host family receives calls hourly some nights from daughters, sons-in-law, aunts, and brothers from America and Cyprus. They share their daily life with their extended family, from showing each other what they are eating, to what they are wearing for an infant baptism to the celebrations of an engagement party. It is heart wrenching to hear my host mom talk about the good old days before her four siblings, daughter, and greater extended family moved away from Beit Sahour to live abroad. Some of them she hasn’t seen for more than six years and she doesn’t have a strong possibility of seeing them in the future.

And yet despite so much of the hopelessness that surrounds our host family, they continue to trust God and live life as normally as possible. They bolt from their seats the moment they hear their grand babies voices, they plan church retreats for the youth group to Greek Orthodox monasteries, and they moan over their school students failing theology tests which I think I would also struggle with knowing how my host mom is as a teacher. My host dad believes that I will forget about them when I go back home to the States, but that would be almost impossible as this place has become like a second home to me. 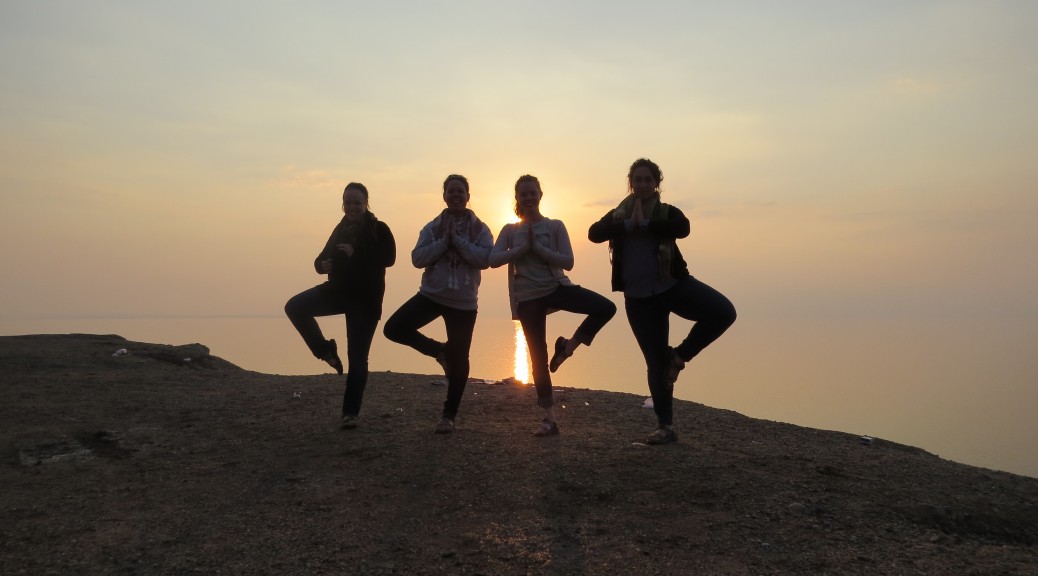 Marhaban – Hello from the Middle East 2015 group! This week has been a whirlwind of new sights and experiences, smells and sounds. From the Bedouins calling out to us, encouraging us to buy their wares, to the enticing dishes at each meal, we have arrived in a new world. Over the next semester, different students will have the chance to share their thoughts on this blog- we hope you enjoy our words, and thank you all so much for your support! “Our two days in Wadi Rum (Jordan) are hard to describe in words, but I’ll do my best. After arriving at the visitors’ center, I thought we were close to the camp. However, to our surprise, we got to ride jeeps the last hour of the trip. In the back of pickup trucks, we drove through the open desert until we finally reached the Bedouin camp. Our hosts were unbelievable. They provided food, fire, and plenty of entertainment, which included music and dancing with the locals. It was so nice to sit in the tents, around the fire, and to sit and enjoy each other’s company– no wifi, no phones, only conversations, laughs, and plenty of stories and stargazing.

On Saturday, we woke up in our tents with the excitement of getting to ride camels. We rode through the desert for about three hours on our camels. Even though they weren’t the most comfortable, I wouldn’t trade the experience for anything. The Bedouins were so hospitable, offering us tea, fire and friendship the whole stay. What an unbelievable and unforgettable couple of days.” 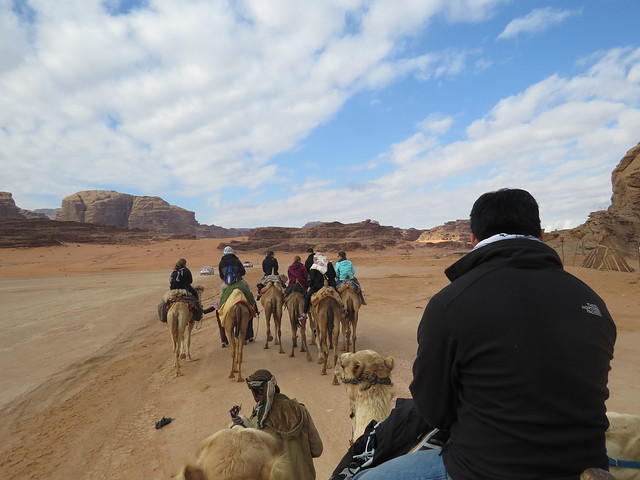