At the time of writing, we have been in Spain exactly two weeks—two weeks ago to the hour, we were en route to the airport, trying to imagine how we would navigate the next month and a half in new cities, a new culture, and for many of us, a relatively new language. So far, our experience has stretched, nourished, challenged, inspired, and encouraged us—here are some of our reflections on the first third of our trip:

During our time in Madrid, we got the chance to take a guided 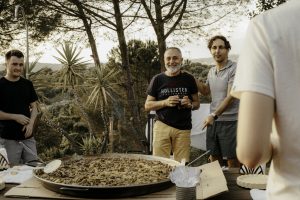 tour of the city’s landmarks such as Puerta del Sol, Plaza Mayor, la Catedral de Santa Maria, and el monumento a Felipe IV. We also explored the city’s not-so-touristy streets and plazas in order to find bookstores, grocery stores, and restaurants that were more authentically Spanish. During one of our first few days in Madrid, we had the privilege of visiting Anxo Perez, an EMU graduate who was born in Spain, to learn more deeply about Spain from a local. He introduced to us new and challenging concepts such as the levels of consciousness and certain ways to be successful. “Always admire effort more than success,” he shared.

Towards the end of our stay in Madrid, we met with three women that immigrated to Spain from Colombia and Romania. All three experienced similar, yet different, situations once they arrived in Spain. Any certification of any career they previously held was invalid because the government does not accept foreign certification. They felt helpless—the process of obtaining documentation takes 4 to 5 years with multiple obstacles that make it more difficult, similar to the process in the United States.

While we were in Toledo, we got a different experience than Madrid in terms of the feel of the city. Toledo had a lot of cool history including being a city that prided itself on fortification. There were 3 walls and a river that aided in protecting the city. They also had a complicated street layout to confuse enemies if they ever broke through the wall, but in 5,000 years, no one ever broke through. Toledo was also a city that lived in relative harmony. Within the city walls, Jewish, Christian, and Muslim people lived amongst each other in relative harmony which was symbolized in some of the pictures from hundreds of years ago. The one that stuck out to me the most was our tour guide’s favorite picture. He said, “There are 2 Jewish kings, David and Solomon, protecting a sentence from the Quran saying ‘in the name of Allah let there be peace’ in a 14th-century Christian church”. I found this to be very profound and a great representation of what the city was like back in the 14th century.

The old city of Cordoba is a place of incredible history, narrow streets through which cars can just barely squeeze as pedestrians flee to the side, and, during our stay, record-high heat. Upon arrival, we were given a map to navigate some of the winding streets. Really though, if you kept the Mezquita in sight with its attached bell tower, navigating ourselves to and from our hostel that first day was fairly simple—walk down the main street; once you reach the large old stone wall and see the courtyard with greenery and a flowing fountain, you know where you are. It is Cordoba’s Mosque-Cathedral, complete with air conditioning that blessedly pumped out into the 100-degree heat as we sat near its entrance awaiting a trek up the hundreds of stairs in the Bell Tower. The next morning we entered the main building itself, into a large echoing chamber reverberating the last music of morning mass. In the middle of the building, nestled behind rows and rows of the original Mosque’s pillars, is an ornate Catholic Cathedral. The building has passed hands from Muslims to Catholics resulting in a beautiful nesting-doll situation of an architectural marvel.

You know how sometimes we think to ourselves, “how has my life led up to this moment?” Well, this thought was certainly circling through my head as I followed a middle-aged woman in a bright red dress through the streets of Valencia, Spain carrying my luggage and trying to communicate in Spanish over the sound of bustling people and honking cars. I had just met this woman and I was struggling to keep up, kind of like a helpless child. This was my first interaction with Rosa, my “host mom” as they call it.

We arrived at her apartment, a 20-minute walk from the school where we will be studying Spanish for the next three weeks. At dinner that evening, I quickly became aware of how much trial and error communicating to Rosa would entail. However, I felt complete support and freedom to speak in Spanish and began to realize that this is how people learn. I have taken plenty of Spanish classes during my academic years; however, nothing can compare to sitting down around a table, with a vocabulary the size of a conejito, and listening to a Spanish woman describe the full, in-depth historical context and complex political scene of the many rituals and festivals of Valencia. Let’s just say there was a lot of smiling and nodding.

After the first day, my confidence and comfort around Rosa increased and I pushed myself to communicate more with her. I found myself learning phrases and words that are extremely useful in everyday language that we don’t focus on in class, and became familiar with the overwhelming sense of accomplishment after having a successful exchange of sentences between us.

I don’t want to have expectations for where my Spanish will be at the end of these three weeks, but I am very grateful for this opportunity and for Rosa, who has graciously opened her home for me to be exposed to Spanish culture.