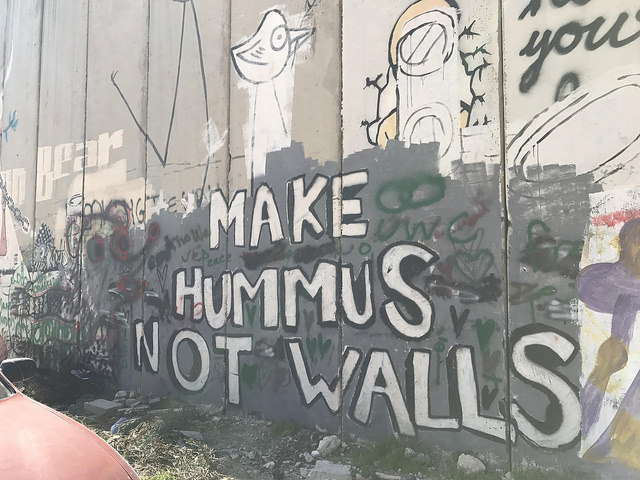 After three weeks of hotel-hopping (and bedouin camp-hopping), we’re glad to be somewhere we can really settle in: Beit Sahour. A Palestinian town in the Israeli-occupied West Bank, Beit Sahour is south of Jerusalem and a short walk downhill from Bethlehem. Of its 15,000 people, 75% are Christians, and we’re all staying with Palestinian Christian host families for the three weeks we’re here.

Austin and I are loving our stay with Reema and Philippe, our host grandparents. Reema has told us that we are her grandchildren now, and she treats us with wonderful hospitality, patient help with our Arabic, and delicious food every breakfast and supper—I ate so many stuffed grape leaves, stuffed tomatoes, and stuffed zucchini on Thursday that I felt like a stuffed vegetable myself. We’ve had fun hanging out with Reema and Philippe’s grandchildren, who live nearby, in the evenings. Elianna, 18, is fluent in English, and tells Austin and me great stories about her life in college and travels to other countries. Ayman, 15, is our business-minded host brother who invited us to play bilyardo (pool) with him and his friends a few nights ago… we didn’t stand a chance. And Jeries, 7, entertained/exhausted us with hours of hide-and-seek, tag, and the floor is lava on our second night here. He and Elianna are helping us learn our Arabic numbers and colors through UNO (or should I say, wāḥad?).

About half of our days are spent at our home base, a classroom in Beit Sahour near the Old City. On those days, we have a 3-hour Arabic lesson in the morning. We’re split up into two groups and focus on learning practical, spoken language that we can put to use right away on the street and in our host families. After the lesson, we’re on our own for lunch with a 15-shekel stipend from Linford and Janet. Here our strategies vary, with some spending most of their money on a 12-shekel shawarma sandwich, while others go with the standard 4-shekel falafel sandwich and supplement with an apple, pomegranate, or piece of freshly-baked pita bread.

In the afternoon, we gather again for a lecture and discussion. We began by hearing about Palestinian literature and the beginnings of the Israeli-Palestinian conflict from two professors from Bethlehem University. On Friday, we watched The Wanted 18, a funny but impactful movie about Beit Sahour during the first intifada in 1993. It tells the story of how the citizens of the town (including some people we’ve met or will meet) resisted the Israeli occupation by buying cows to start a dairy farm, and later hiding them when the Israelis tried to shut it down.

When we’re not in the classroom, we’re out on field trips throughout the West Bank. Our first day was a tour of Beit Sahour and Bethlehem, including the Biblical sites of the Shepherds’ Field and the Church of the Nativity, which was built on top of the cave where Jesus may have been born. In multiple places, we saw the border wall that separates the West Bank from Israel and Israeli settlements. In building the wall, Israel inadvertently created a massive canvas for Palestinians to express their opposition to it. We could have spent a whole day along the wall in Bethlehem just looking at the graffiti, which ranges from serious (stencils of children playing with barbed wire) to humorous (“MAKE HUMMUS NOT WALLS”) to cartoons that mock Donald Trump and his intentions to build a similar wall on the US-Mexico border. My favorite graffiti is back in Beit Sahour, a picture of a “flower thrower” by the mysterious British street artist Banksy.

Another of our day trips took us north of Jerusalem, and along the way, we admired the landscape after a few days of rain: beautiful green hills, vineyards, and olive trees, in contrast to the tan desert scenery we’d gotten used to in Egypt and Jordan. We stopped at Taybeh, a town where Jesus went after raising Lazarus from the dead, and which also has a famous brewery. In Jifna, we saw the headquarters from which the Romans operated for an assault on Jerusalem around 70 CE, giving us another glimpse into the empire which has left traces everywhere we’ve visited so far. For lunch, we wandered in the rain through downtown Ramallah, the current political and economic capital of the West Bank, and the struggle between shawarma and falafel continued. Some of us couldn’t resist and opted for a bit of both. We ended by visiting the new Yasser Arafat museum to learn more about the Palestinian leader who tried to make peace with Israel.

While we continue to enjoy the manageable and rewarding challenges of learning some Arabic and living with host families, our conversations with the locals and experiences on our day trips remind us of the much larger, much more sobering issues in the places that surround us. The divide between Israelis and Palestinians seems impossible to bridge—one of our Palestinian lecturers told us that there is “no hope at all in our present situation.” It can certainly feel hopeless to learn about a conflict that began more than 100 years ago and realize that it’s still going on today, with very little progress made.

But in the spirit of making hummus, not walls, let’s end with some of my friends’ favorite Arabic words and phrases they’ve learned recently:

Natalie: yalla — “let’s go,” because it brings back memories of being in Egypt with our guide Samer.

Collin: fi lmišmeš — “when hell freezes over,” or literally, “in the apricot,” because it’s funny.

Jessie: ilbēt bētek — “feel at home,” or literally, “the house is your house,” because it’s really sweet.

Luke: yōm saʿīd — “have a good/happy day,” because my host dad smiles whenever I say it to him.

Allison: tšarrafna — “nice to meet you,” because when I get the chance to say it, it means I’ve met someone new.

Daniil: inšālla — “God willing,” because it often implies maybe, maybe not, I’m not in control.

Marianna: rummān — “pomegranate,” because I’ve indulged so much on this trip. Good memories.

Isaac Alderfer: šāy — “tea,” because it’s a part of every day and I need it to function.

Carly: ḥilu — “sweet,” because I’m eating too many kinder bars, the candy is awesome.

Silas: habībi — “friend, lover, or anything in between,” because it was my nickname in Elementary Arabic class.

Karissa: also habībi, because it’s fun to say and you hear it a lot here.

Rachael: šukran — “thank you,” because it’s the only word I can consistently remember when I try to speak Arabic on the streets.

Erin: mumtaz! — “awesome!” because we’ve seen so many awesome things, so I use it a lot.