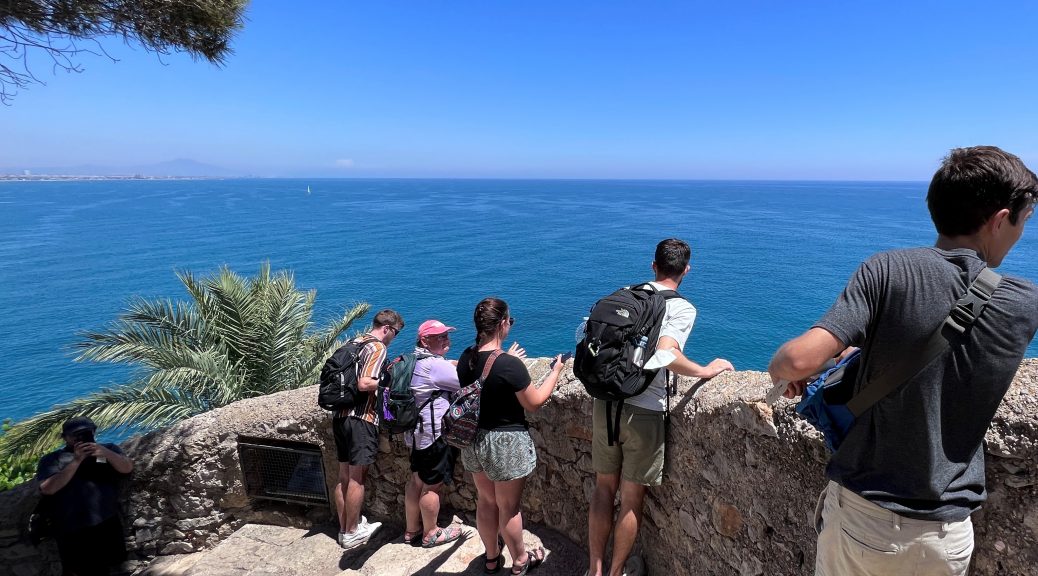 Putting down roots in Valencia—getting to know the city and its opportunities, our host families, and Taronja, our school—has greatly enriched these past few weeks. As we face our last week here, we wanted to share reflections on past moments, enjoyable activities, those who have been kind enough to open their homes to us, and the school we’ve been attending.

Finding Joy in the Most Unlikely Place

We left Madrid about two weeks ago and have been in Valencia ever since, staying with host families and studying Spanish. However, one of my favorite experiences from the trip so far happened in Madrid, so I would like to share a little bit about that experience (even if it is a little bit of a step back in terms of the timeline of our trip.)

This experience happened in, of all places, a laundromat, a day or so before we were slated to leave Madrid. It was later in the evening when I somehow struck up conversation with the only other person in the laundromat. He didn’t have enough change to start the washer so I lent him some so he could get his clothes started before going to get some change at a nearby store. He did so and came back with something to drink for both of us. We sat and talked for a while until two couples came in with the same problem. They both went to the store and got some change and came back to chat while we all waited for our laundry. It turns out that the first man is from Chile and one couple is from Brazil while the other is from Honduras—so six people from all over the Americas met up in, of all places, a laundromat in Madrid, and enjoyed time together.

I personally had a great time and think this is something that I probably will never forget. I think it goes to show how simple, unexpected, things like this can be some of the most fruitful and I’m encouraged to look for more experiences like it in the remaining three or so weeks of our trip.

As we begin our last week with our host families, I’ve done some reflecting on how I’ve appreciated the relationships we’ve built with them. From our conversations every evening about our days to playing with our host dog Luna, I am so thankful for every moment of it. Two ways we really connected with our host family were through food and Lord of the Rings. Our host mom loves to cook and has made us many delicious traditional Spanish dishes for dinner. She has also expressed to us how much it means to her that we always eat all of the food she’s made and are not picky eaters. As for Lord of the Rings, one of our first nights here our host dad invited us to watch Lord of the Rings with him—little did he know Elizabeth is an avid Lord of the Rings fan. We picked up a little ways into the second movie with the audio in Spanish and English subtitles. Since Laura and I have never seen Lord of the Rings this was a bit confusing for us, but we have loved this special time to bond with our host dad. Now we are working through the third movie in bits every few nights and it makes our host dad thrilled every time we ask if he wants to watch some more.

Attending Taronja language school has added stability to our routine here in Valencia. The school provides about 4 hours of language learning a day but it’s not all textbook learning; there is a real emphasis on getting students out of the classroom and into the streets to use their Spanish and observe how it is being used around them. The other 4 hours of the day are free for students to do personal exploration to see the city: museums, parks, art exhibits or whatever else they desire.

Our group is broken up into three different levels of Spanish instruction: beginner, intermediate and advanced. However, for all skill levels the school is run with a language immersion philosophy. This means that there is essentially no English spoken during class time. The strictness to which this rule is adhered to varies a bit based on the skill level. It may seem counterintuitive to teach in the very language we’re trying to learn, but immersion is actually well known to increase comprehension and language retention.