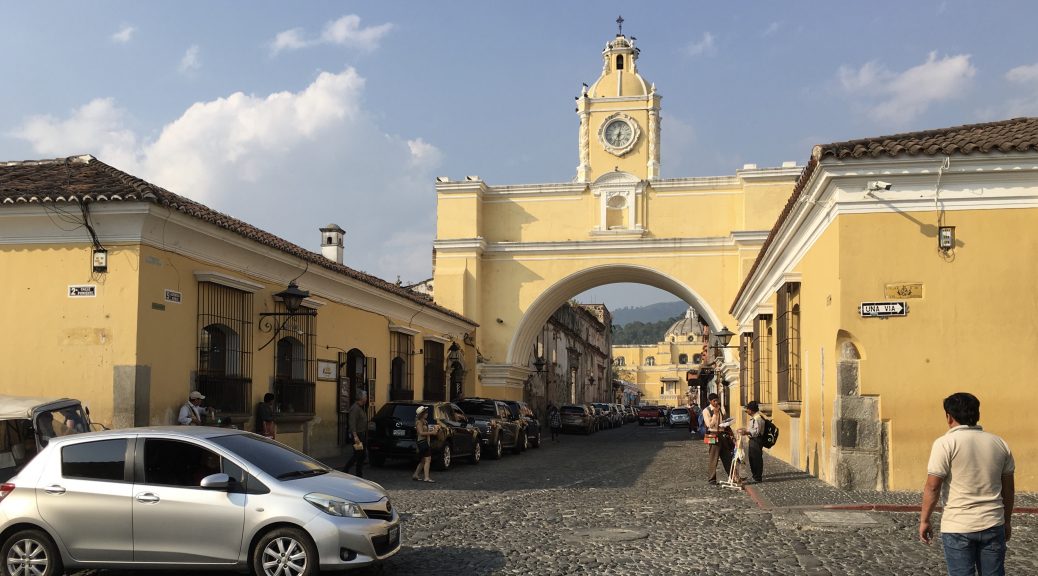 The sun makes a halo in the air pollution as it falls behind the mountains.
A slight breeze plays with the leaves, my hair, and the laundry line.
My brother’s Honda jacket still hangs there. How many days has it been now?
Several dogs engage in territory disputes, paws and head visible over brightly-painted roof-edge walls. Barking.
Grackles soar over with their flap-glide flight, silent for a moment out of the day.
Chickens, however, are alive and well in La Brigada and make it known.
A distant siren could be a tardy policeman.
Swifts pass over, buzzing the rooftops with vibrating wings in their search for insects. There aren’t too many here.
If only I could move like these, chattering as I wheel over traffic on the Calzada Roosevelt. I’d be home in 15 minutes.
The parakeets, noisy in their furious flight, have crossed the city to their roosts. Until tomorrow.

The past weekend we traveled to Antigua Guatemala, originally known as Santiago, and once the capital. There are many beautiful churches in the town, including several massive cathedrals in brilliant yellows and oranges. There are also many shops with all sorts of touristy items. Antigua is a city that seems to have embraced its role as a historical destination. Overlooking the city, there is a forested hill called Cerro de la Cruz, which has a beautiful view of the city and the majestic Volcán de Agua, whose eruption and the subsequent water damage to the city caused the movement of the capital. Some of us explored the market a bit, including eating in the comedor there, for which I have no close comparison in the states. There are twenty or so small restaurants with their own sitting areas. Each restaurant is run by what appeared to me like a single family. It was good, cheap food, about $2 for a filling meal. Overall, Antigua was cool but confusing in contrast between “authentic” and “tourist” interactions.

We left Antigua Saturday for Chichicastenango to see the city and specifically the Sunday market. It was a beautiful market, but I had trouble with the consumerism and capitalism that permeated our time there. I learned to bargain, or regatear, walking around the market. And while it proved helpful in getting a better price for myself and others, it also made me feel guilty. Yeah, these people are trying to get more from us, obvious visitors, than they would ask from locals, but isn’t that the point of capitalism? To maximize profits? It is the exact same system that we (US companies) inflicted on people in Central America that allows us to get cheap food and goods. Also these prices are relatively high, but they are insanely cheap in dollars. Would paying a higher price help increase the standard of living in the area? Would it affect the sourcing of goods? Would it lower the environmental impacts? Am I even paying the value of an item at $10 including materials, labor, and shipping? Tourism tends to reject relationships between tourist and host and the responsibilities that come with relationships: of the tourist to learn about the host in a meaningful way; of the vendors to sell quality products; of the tourist to care about conditions for the vendors, manufacturers, and environment.
You might not be able to tell, but I enjoyed Chichicastenango. There is a majestic church, I had fun learning to barter, and the streets were full of colorful objects, interesting smells, and beautiful people. And I still have questions and reservations.

To wrap this up, I want to share a little about the birds here. It’s amazing the level of avian connectivity in the Americas. I have seen a warbler here on our compost pile that I have seen near my compost pile in Ohio. I also have seen birds found along the West Coast of the US from the roof. National borders literally mean nothing to these travelers. So far I have seen 39 species and the highlights include black-and-white warbler, Grace’s warbler, grayish saltator, white-eared hummingbird, and acorn woodpecker. 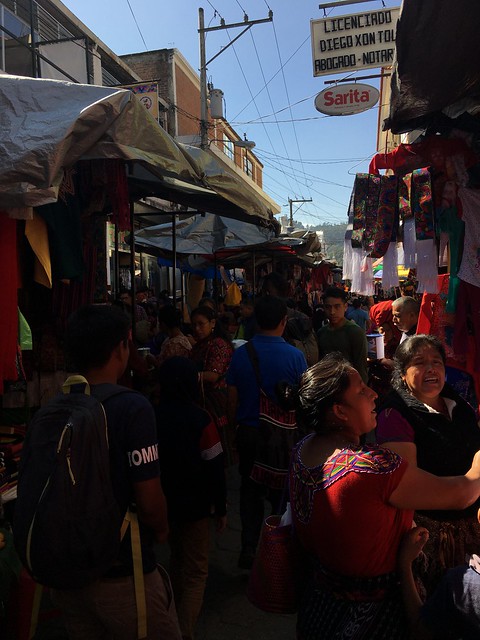