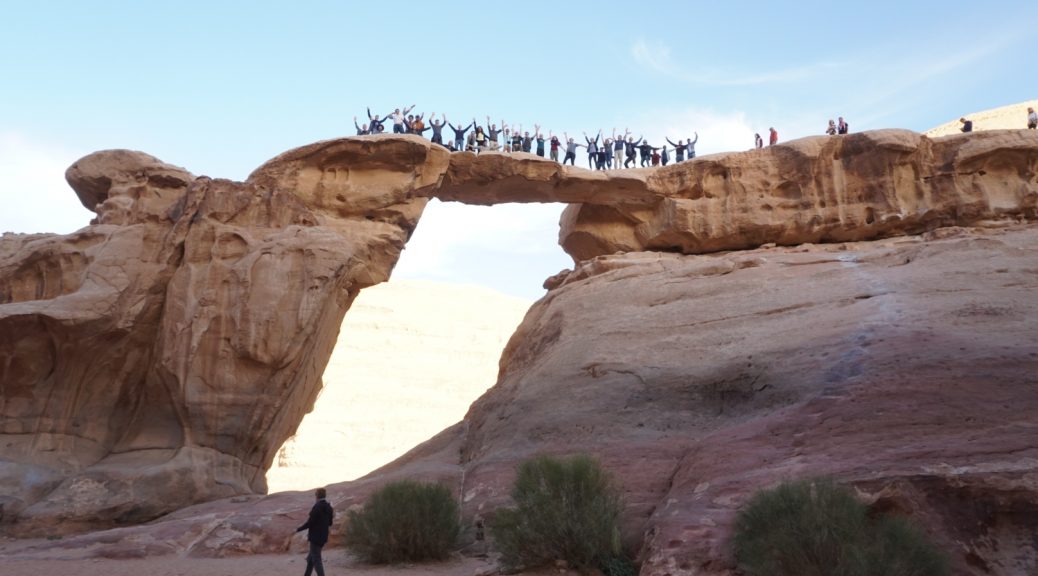 Since Graham left off at the Bedouin camp we have seen, heard, smelled and experienced many more new things.

After leaving the camp, we as a group rode on the bus to the small village of Dana where we were to begin our adventure on the Jordan trail.

The Jordan trail goes from Dana down into Petra, and we as a group were extremely fortunate to spend three days hiking on this trail.  The first day of hiking was mostly down hill into Feynon, where we spent the night at a beautiful vegetarian eco-lodge which had a pasta dish that changed my life. Day two of hiking was mostly flat and took us through little Petra and to the Seven Wonders Bedouin camp, where we stayed for the night. Our third day of hiking took us through some of Petra itself allowing us to see Petra’s monastery, gorgeous ravines and many, many goats.

After three days of hiking, we reached our hotel in Wadi Musa (which translates to the Valley of Moses) where we showered and refreshed ourselves in preparation for a day of exploring the ruins of Petra. While it was exciting to see all the ruins, the Nabatean’s impressive water systems, famous sites like the Treasury and sip Arabic Coffee in such an awe striking place the day was also bittersweet. Sadly, we said goodbye to one of our trusted guides, Mahmoud who had been with us since Aqaba. Mahmoud had been a well-spring of information for the past week, and his love and passion for Jordanian conservation was evident.

After spending a second night in Wadi Musa, we continued to Amman, Jordan’s capital city. On the way to Amman we were fortunate to stop at exciting places such as Moses’ spring (from the rock he struck), the Shobuk Castle, which was built by crusaders, and Umm Ar-rasas, home to Jordan’s largest mosaic.

Amman is a large city, and the hustle and bustle is a far cry from the quiet desert dwellings we have been inhabiting the past week. Our hotel, in the heart of Amman, has thrust us into the chaos and excitement that is city living. Thus far, our time in Amman has been full street-side restaurants, traffic, and delicious desserts.

On our second day in Amman, we had the opportunity to hear from the MCC Jordan program coordinator and learn about the exciting work MCC is doing with its partners here. We also were able to eat lunch with students from other various American Christian colleges that are a part of the Middle East Studies Program (MESP) here in Jordan. It was fascinating to compare notes on our study abroad programs, as well as comforting to connect with others like us experiencing the same things. We rounded out our time with MESP by hearing a phenomenal lecture from one of their professors on the war in Syria.

After a free day in Amman yesterday, and visiting Mt. Nebo we have arrived in Palestine and are settling into life in our host families. While we are all largely seeing the same sights and places on this trip, every one of us is processing our experiences in different unique ways. So, in hopes of providing a fuller picture of this past week, I have asked some of my classmates to share things they’ve been learning or noticing.

Thanks all for your ongoing support as we continue to experience new things and ask deep questions.

A few days ago we were able to receive a lecture from a professor, who has been living in Jordan and working with Syrian refugees for over a decade. He opened all of our eyes to the realities of the civil war in Syria, including countless crimes against humanity committed by the Assad regime, as well as the mistakes made on the part of the United States and other nations. Of all of the things that we have learned so far, I found this to be the most important. Particularly because of the utter lack of news coverage in the United States. It is mind boggling to me that we as a nation are so uninformed, as well as misinformed. Before making any judgments on the Syrian refugee crisis, I would urge everyone to do some unbiased research. Our guest lecturer’s greatest suggestion was to talk to Syrians personally about their experiences in order to educate ourselves. The United States government is not blameless in the situation and so you most likely will not like what you find, but to ignore, in his words “the worst humanitarian crisis of our time” is quite simply wrong.

While we made our way past a Bedouin camp on our second day of hiking, a flock of what looked to be small herd of baby goats stormed out to meet us. Naturally, we also sprinted to meet them. I managed to pick up a small black one, but when I put him down he couldn’t figure out where the rest of his flock had gone. He tried to follow us for a ways before he just started screaming. Eventually, the shepherd made his way over to lead the goat back to the rest.

Watching that shepherd come find his “lost” goat gave me a new dimension to the Bible’s allusions to Jesus as our shepherd. Normally, I had pictured some sheep just wandering through some green pasture, but that wasn’t the context at all. Being in the desert allowed me to more accurately place the stories I’d the Bible in their proper context as they should be.

The most interesting part of the trip has to be playing soccer/football with a group of Jordanian guys on our free day. I, along with Mary, Isaac, Silas, Daniil and Luke went to the “Youth Sports City” (park) to play some soccer. We ended meeting the coolest group of guys and played a 6 on 6 soccer game against them in the parking lot. That wasn’t even the best part, as closer to the time we needed to leave, we gathered as a group and talked. Our conversation consisted of differences between the American and Middle Eastern culture, they taught us a little bit of Arabic, and told us how to handle the Amman City Taxi system. We finished with a group photo; this experience opened my eyes to the Jordanian sense of community. Even though we weren’t from the area, they still welcomed us with kindness and open arms.

Reading about Moses’ death on the top of Mt. Nebo was one of the most out of life experiences I’ve had yet. Reading the stories, walking the paths, digging into the thoughts and feelings of the Israelites all had built up to this very moment. Standing on the top of that mountain, horizon filled with history – the very foundation of my religion was one of the purest representations of God’s character. All those years of wandering, waiting, grumbling along the vast desert sands, all those years Moses served and led – perfectly imperfect. From Nebo the promised land was looking him straight in the eye. The Lords’ promises to Abraham and Isaac were coming to completion. It was the climax of the story. Gods masterpiece was slowly coming together, interweaving so many different lives.

Originally I thought that Moses would be disappointed because he couldn’t travel into this land flowing with milk and honey. But maybe not, maybe this was the plan all along. Moses’ heart was used for the good of the Lord’s story. His work was over – the masterpiece was finished in him. He got to stand on that mountain knowing that he listened to his call and that the Lord accomplished much through him. I only hope to have that kind of satisfaction when the Lord calls me home.