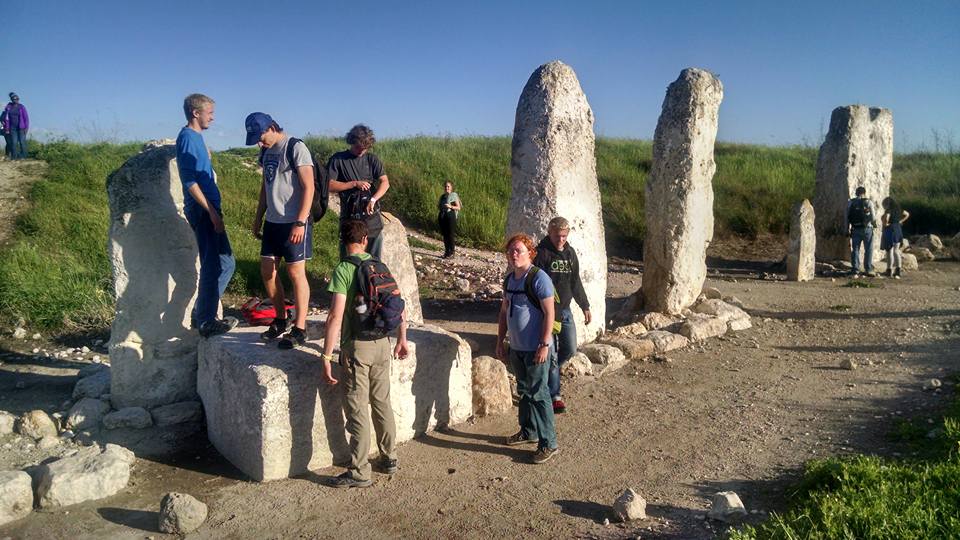 Last week, we arrived at Jerusalem University College (JUC) after spending a few days at the Jewish Efrat settlement in the West Bank, marking the transition from contemporary politics to ancient biblical geography. For me, this change has been a welcome one, especially after the intensity of Efrat. For once, it’s nice to be a college student again. We live in dorms, these beautiful old buildings that once housed a Palestinian Boys school. Just outside is a garden where students sit in circles for lunch, soaking up an idyllic seventy-degree sun. The rhythm of going to class and rushing to the cafeteria for lunch reminds me of the days when I was an underclassman living in the dorms, a fond memory indeed. During breaks between class, we play Knockout at the hoop just outside the academic building.

The JUC program is obviously quite distinct from a normal college class, however. After a few half days in the classroom and puttering around Jerusalem, we spent two full days exploring the biblical archeology to the east – Jericho and the Jordan River – and west to the Beit Shemesh, where David killed Goliath. In all of our studies, our wonderful professor, Aubrey Taylor, stresses the geographical and cultural understandings that are needed to place the Bible in its proper Near East context. For example, we talked about the geography around Jerusalem, emphasizing both the local valleys that protect Jerusalem to the west, south, and north, and the broader isolated Judean Hills. All to say that Jerusalem was isolated, and thus protected from invaders, but it didn’t have the access to international trade route that ran along the coast to the west. Perhaps this isolation should color our reading of how wary the Israelites were about foreigners, and their relative poverty in the hill country.

Yet, outside of this academic rigor, I’ve had fun exploring too. On Tuesday, we spent time in the City of David and walked through Hezekiah’s tunnel, which extends a good 500 meters from its Gihon Spring source to the Pool of Siloam inside the City of David. Several renditions of “Wade in the Water” were sung as we trudged single-file in knee-deep water. Of course, there is importance to this tunnel, which was rapidly built when Hezekiah rebelled against the Assyrian Empire (which went badly, unsuprisingly). There’s a story about one of the early explorers of the tunnel, Charles Warren, who was crawling through the tunnel back when it was heavily silted, and the water level rose to the point where he was twisting his neck to keep his head above the water. Fortunately, we didn’t have such difficulties!

Another highlight was the Jordan River, where five of our group were baptized by Linford in its muddy waters. Just behind us were Israeli soldiers, and just on the other side of the bank with Jordanian soldiers looking on, others were baptizing in the same spirit. Here, too, we read about the Israelites fording the Jordan before taking the city of Jericho during Joshua’s conquest.

Today, we took our first exam, and then had the afternoon off, a rare chance to sit back and relax. Without weekend breaks and only a few hours in the evening after 10 hour days in the field, it was rejuvenating to throw Frisbee in the garden and do some laundry before heading out for another week in the field. Tomorrow we head to Ashkelon to swim in the Med, Monday we swim in the Dead Sea, and the rest of the week we head north to the Galilee where we sleep in bungalows overlooking the Sea of Galilee. What a week to look forward to!