We arrived in Beijing at about 5:30 pm (5:30 am EST) on Friday feeling very groggy but still overwhelmed at the fact that we were in China. We ate our first authentic Chinese meal, Beijing Duck, and then fell into our hotel beds exhausted. Our first full day was slightly rainy but filled with exciting adventures. We started the day by taking our first bus ride to Tiananmen Square. (For anyone who is wondering, the buses are just as crowded as you think). Next, we went to the Temple of Heaven, where the Chinese Emperor traditionally held ceremonial sacrifices, and then a few of us haggled for “name brand” merchandise at Pearl Market, a mall popular among Westerners. The next day was Sunday, so we went to one of the only churches in Beijing that has an English translator. Church services tend to last a little bit longer in China, but the interpreter provided an excellent translation and joined us for lunch afterward. Then we walked around The Forbidden City, a lavish and gigantic palace in the heart of Beijing. That afternoon, Myrrl set us loose on Wangfujing Street, a very modern-looking area with several shopping centers and roadside food stands selling foods ranging from chips on a stick to giant spiders. We spent Monday on the Great Wall, hiking about 4 miles of steep ascending and descending stairways. The sheer size and scope of the Wall and the surrounding mountains left us in awe. While tiring, it was exhilarating to be at a place that we had heard so much about and that had such an important place in China’s history. On Tuesday, our last full day in Beijing, we visited some smaller attractions, providing a nice contrast to the important historical sites we had been visiting. We went to the Summer Palace (where the Dowager Empress spent her time), the Olympic Park (where the Bird’s Nest is located), and to Houhai Lake (a market area). After four days of tourism, fried noodles, and impressive skylines, we flew out of the capital city en route to Nanchong – our next destination. 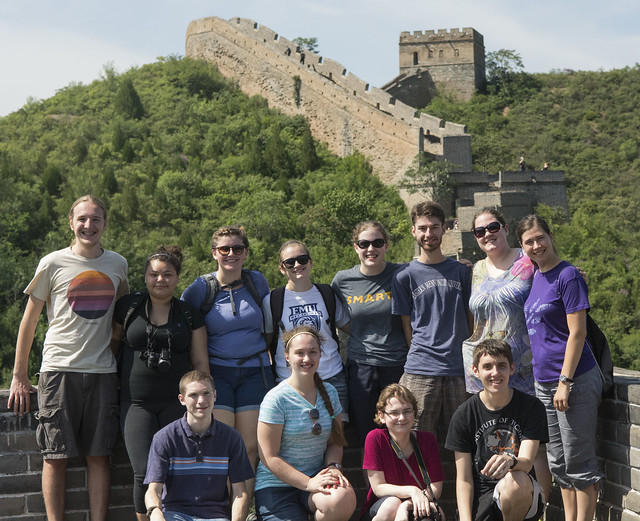