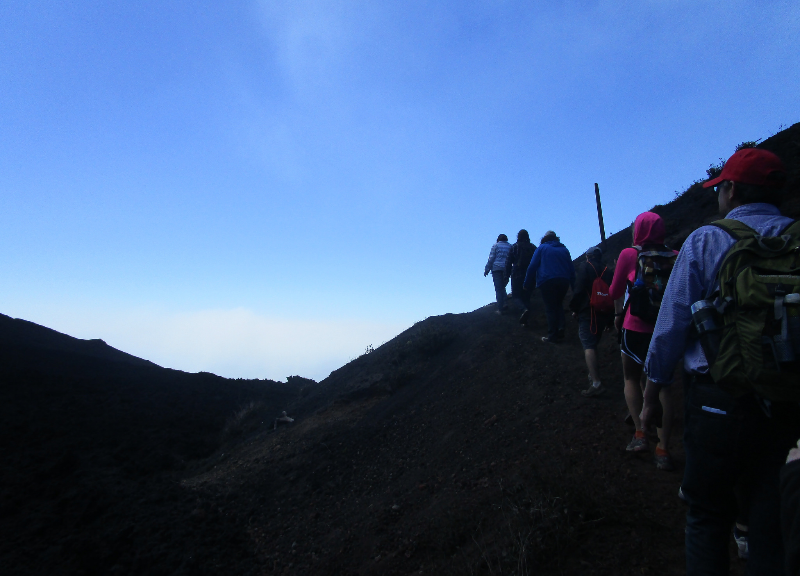 Throughout the big transition from the U.S./Mexico border to Guatemala, we experienced many different emotions. Coming off of such a full and difficult two weeks, we felt we had seen so much but hadn´t done anything about it to help. One evening we talked to a Christian border patrol agent, who challenged us with the thought of whether or not it is legal to be a Christian. We didn’t want to forget what we’ve experienced at the border, but at the same time wanted to be present in Guatemala with our host families and at CASAS. The first full day at CASAS was new and exciting, yet a little intimidating because we had our Spanish placement tests and our first Spanish class. Most classes have only two students, with the largest having four, so we have pretty personal attention. We have 3 1/2 hours of Spanish class every morning, usually a class or fieldtrip with the entire group in the afternoon, and the evenings are spent with host families. It has been fun to come to school each morning and tell each other how our evenings went, because each person’s experience is completely different.

Some educational highlights have been our trips in the afternoons. Monday afternoon the group went to the Central Plaza and toured the green National Palace, which is where the President has his meetings. It took up an entire block and held a lot of history inside, with murals depicting Mayan and Spanish conflict, statues representing peace treaties, and the fingerprint of a president in the handle of every door. We also walked around the area a bit to learn about different historic places. On Tuesday afternoon we went to the National Cemetery, which also helped us learn about the effects of many different countries and cultures on Guatemala, including the Chinese, South Korean, and German. The richer families are able to buy a plot and build a structure for the entire family, but the poorer people rent out a grave stacked above ground, with their families paying a certain amount every year for fourteen years, and after fourteen years the remains are moved so the spot can be rented to someone else. Adjacent to the cemetery is the national landfill, where many men, women, and children work (and used to live), sorting through the trash for recyclables to sell, most only making around 10 Q. per day (about $1.25). We learned how several people have died doing this dangerous work, but they have no choice.

The second half of the week was full of physical discomfort, and consequently a few free afternoons, as nearly every single person in the group strangely got sick over several days. It turned out to be a bonding experience, but we´re all still trying to recover from that. Most of us, however, were feeling well enough to hike the Pacaya volcano on Saturday. Though it was a steep climb up (and was a little harder because of the altitude and the fact that many of us were still a little weak from sickness) the view of the crater, the valley, and the neighboring volcanoes was well worth it. We walked on the hardened lava and saw the effects of the huge 2010 eruption as well as the one just last year. We experienced Mayan makeup, many native plants, and roasting marshmallows from the heat of the volcano. Overall we’ve experienced and shared laughs, tears, hugs, and unforgettable memories this week, and wouldn’t trade them for anything.

I have learned so much this week about myself, the group, and the Guatemalan culture. Guatemala City is absolutely beautiful, but I still find it strange how it very suddenly changes from a gorgeous green wilderness to very urban. I learned that safety is also very relative to culture. My first weekend and week with my host family felt very overwhelming because I couldn’t understand much at first, and translating everything in addition to a full day of learning and seeing new things, learning the bus route, and doing homework drained my energy quickly. I’ve already noticed, however, a significant improvement in how much I understand and know, and my list of new vocabulary words is ever growing.

To sum up my week in the form of senses, here’s what I noticed: the green valley amidst the rushing traffic, the warmth of the sun, the look on many homeless people’s faces when we passed, the stares I’ve gotten because I stand out, the feeling of a much-needed hug from friends, my baby brother’s smile, dancing, and funny gestures, the loud and abrupt song of strange birds, the roar of the buses, the strong smell of someone’s cologne, the shouts of people in the street, the loud voice of a man proclaiming the gospel on the bus, the sounds of Spanish songs, the taste of good food, feeling weak and tired, the smell of the smoke of a volcano, and the feeling of being so overwhelmed I want to go home but battling through it and seeing how God was carrying me through it all.