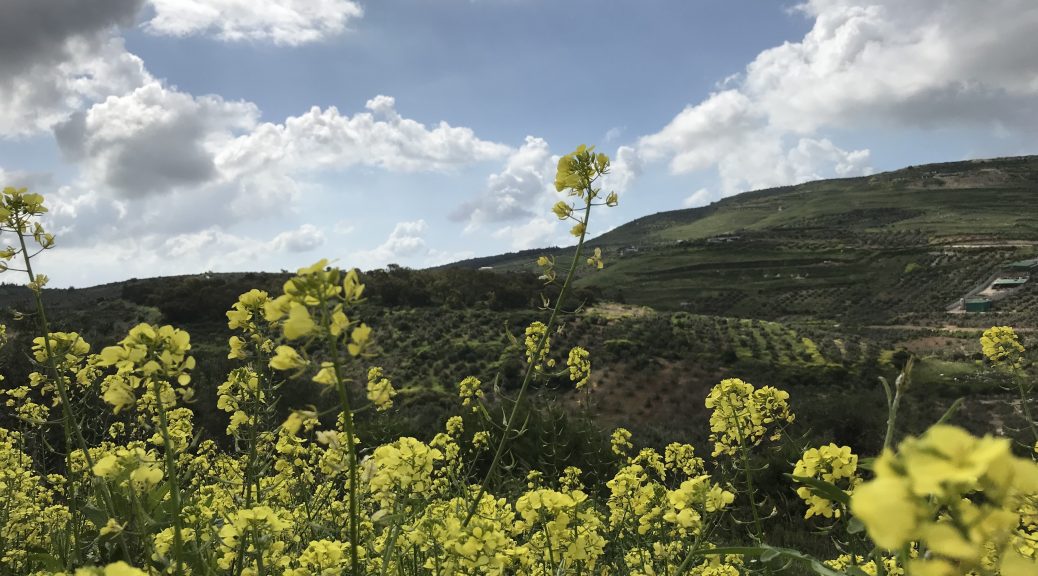 Fresh off our settlement experience, we spent last week in Haifa, a port city on the slopes between Mount Carmel and the Mediterranean. Our days, organized by Oranim College, were filled with lectures, documentaries, and museum visits. That included a preview of this past Tuesday’s election, in which Benjamin Netanyahu and his Likud party effectively remained in power. After his pre-election promise to start annexing the West Bank, the future looks even bleaker for our friends back in Beit Sahour.

We also had many a mifgash, or “encounter,” with Israelis. Two of my favorites were a talk with Benji, a 20-year-old combat soldier, and a day spent with best friends Yael, a Jewish Israeli, and Rawan, an Arab Israeli. They took us to each of their homes and talked about the ways their lives are similar and different.

During our free time, we had to balance exploration of the city—the Baha’i Shrine and Gardens were beautiful—with academic work: unfortunately, we don’t just get to travel and have fun all the time. Most evenings in Haifa found several students in the lounge, sharing portable keyboards and typing out research papers based on interviews we’ve been conducting throughout the semester. Toward the end of the week, we all sat in a circle to read our thesis statements out loud, and it was cool to hear the 26 different topics we’ve been digging into.

Another assignment was to split up into groups and each present the Israeli-Palestinian conflict in an interesting way. On Saturday night, we gathered to enjoy each other’s performances, which ranged from finger painting, to two people talking while divided by a curtain, to breaking the world record for the most consecutive readings of the Balfour Declaration. They were all excellent, but the most meaningful for me was a group that depicted an Arab mother and a Jewish father reading two different bedtime stories to their children simultaneously. Sometimes the books said the same things, but many of the pages had slight differences that described the divisions between the two groups and the way they view this land.

This week, we moved on to Nazareth, Jesus’s hometown and our last major stop in Israel. For two days, our group split in half to learn about Roman occupation and resistance (I got “stabbed” by a zealous Linford) and to volunteer at Nazareth Village. The Village is a re-creation of a first-century town like the one Jesus lived in, and it gives us a more realistic view of the place where he spent about 25 years of his life. Some students dressed up in first-century clothing and picked weeds like peasants as tour groups passed, while others stayed in shorts and t-shirts to haul rocks, clean stables, and work in the gift shop.

For the rest of the week, we embarked on our last big physical challenge of the semester, a 65-km trek on the Jesus Trail. The trail was started ten years ago by Maoz Inon, an Israeli, and Dave Landis, an EMU grad, to allow people to walk in the places Jesus walked and connect some of the important sites from his travels. When we started out from Nazareth, Linford read us the Bible passage where Jesus tells us not to worry by saying, “behold the birds of the air” and “behold the lilies of the field.” As we walked, Linford encouraged us to observe the things around us and pick out something new to behold. Here’s what we came up with:

Behold the trail we walk: sometimes straight and easy, sometimes crooked and demanding, but always a fun adventure. –Graham

Behold the snails which cling to the flowers. Though easily overlooked, God notices all.  –Rachael

Behold the cows of the pasture, for they peacefully accept strangers and are slow to anger. –Jessie

Behold the barbed wire fence, almost invisible amongst the lovely flowers that now surround it on both sides. –Silas

Behold the roof that provides shelter and comfort from a world that can be harsh.  –Nealon

Behold the trees and flowers rooted to withstand the wind and rain. –Natalie

Behold the highway, a deadly risk, yet wonder and promise drives us on. –Elliott

Behold the confusion. For it seems as though we go the wrong way, yet we are led down right paths to shade and nourishment. –Luke

Behold the beholder in the eye of beauty.  –Isaac Andreas

Behold the trail blazes that take the place of our physical Jesus in directing our path.
– Lauren

That afternoon, we made it to Cana, where Jesus turned water into wine and where we beheld a delicious dinner. The next day, we set out through rolling countryside and fields of beautiful flowers. Between chatting, playing music, and doing funny impressions of people we’ve met, we meditated on Jesus’s parables, where he compares the Kingdom of Heaven to ordinary things:

The Kingdom of Heaven is like a well-paved, level path. Weary travelers do not stumble because of it. –Marianna

The Kingdom of Heaven is like a plowed yet unsown field; something will eventually grow but it can be anything you want it to be. –Tor

The Kingdom of God is like the orange tree. Though we cannot reach the upper branches right now, we can still enjoy the fruits it produces and sweet aroma that surrounds us.
–Emily

The Kingdom of Heaven is like a city viewed from a distance: you can’t see a path that leads there, but you know that there is one.
–Ben

The Kingdom of Heaven is like the sun, always there but not always appreciated.  –Audrey

The Kingdom of Heaven is like a field of wheat sown with careful intentionality, full of uniformity, yet defined by individuality.   –Isaac Alderfer

The Kingdom of Heaven is like a foreign language. It’s hard to appreciate when we don’t understand it. But once we begin to understand, we can see and hear it everywhere.
–Austin

We were rewarded at the end of the day with a dinner fit for a king and heavenly fudge brownies in Ilaniya. On Thursday, we had to leave early for our longest day, which took us through mud and over the Horns of Hattin. Linford read us some of Jesus’s statements like “blessed are the peacemakers” and “woe to you who are rich,” and we thought about the kinds of actions that we want to encourage or discourage in today’s world:

Blessed are those who seek beauty, for they will always find it. -Karissa

Blessed are those who stand in treacherous waters to help others safely cross. –Skylar

Blessed are those who actively listen to people who are very different from them. –Collin

Blessed are those who change their mind, for they will be given wisdom. –Allison

Blessed are those who listen joyfully and graciously.  –Carly

Blessed are those who appreciate the person right in front of them. –Mary

Blessed are the weary, for they shall find rest. Woe to those who rest too long, for that shall bring unrest. –Daniil

Blessed are the butterflies who rise above the borders humanity has made. –Erin

In Arbel that evening, we were blessed by hot showers and a cool pool to splash around in. For the final day of hiking, we went over the cliffs of Arbel, through herds of cows, and down to Capernaum on the Sea of Galilee. On a hill where Jesus may have given his Sermon on the Mount, we tried to put ourselves in the places of the tired, downtrodden, ordinary people who came there 2,000 years ago. We imagined what they might have thought about Jesus, who was preaching a radical message that threatened to disrupt their relatively peaceful lives under Roman occupation, but who also offered a view of a new kind of kingdom in which they could truly be free.