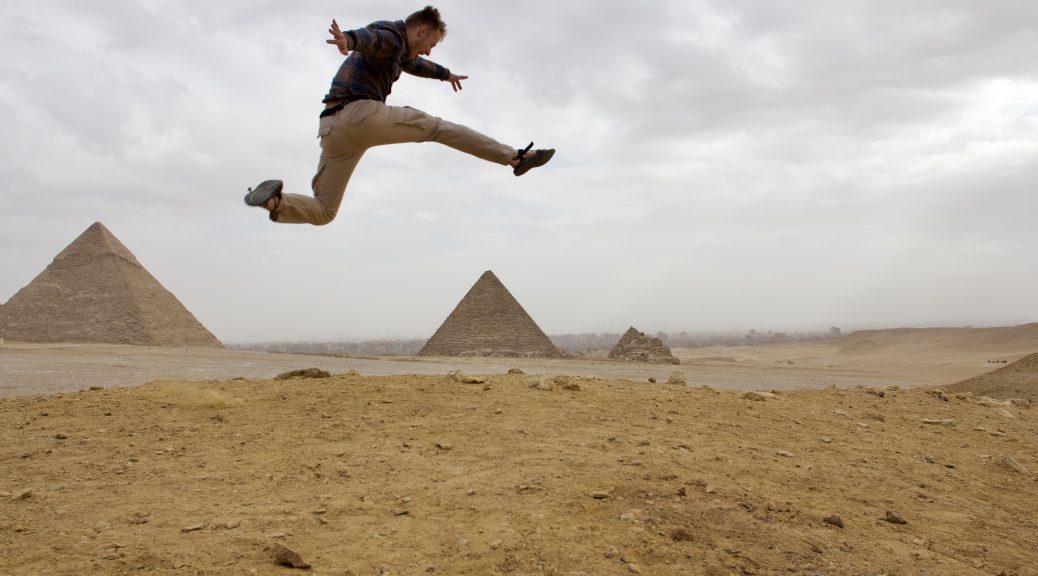 Has it really only been a week? That’s the question that comes to mind as I write these words in Anaphora, a compound about an hour’s drive from Cairo. It’s a beautifully serene place that offers us time and space to unwind and reflect.

Yes, only a week. Driving away from the farewell crowd at University Commons seems so long ago. After 20 hours of travel, half of which were spent in airports, we were greeted in the capital by our guide Samer (Sah-mair), who welcomed us with oranges, bananas, juice boxes, and flowers (for the ladies). Fortunately, it was nearly 9 PM Egypt time, so we were able to sleep soon after. Jet lag was hardly an issue.

Samer has since led us all over Cairo and Giza, holding his scepter topped with an ankh, the symbol for life, high in the air. In the morning, we saw the Great Pyramids, checking the only surviving Wonder of the Ancient World off of our list. These tombs held the global record for tallest man-made structure for nearly four thousand years, and the engineering plus sheer manpower it would have taken to achieve the stacking of rocks – each weighing multiple tons – is pretty flabbergasting. Our group took in their epochal presence, as well as that of the Sphinx, and moved on to visit a papyrus art gallery, a carpet making school, and a handful of other ruins that are rich in history, yet often overshadowed by the Pyramids.

The next couple of days were a similar flurry of motion, with bus rides and hotel evenings being our main opportunity for conversation and processing. We saw the Nile many times. Some in our group noted the stark contrast in the land that has access to its water and land that does not. Often, a road separates brown and grey urban desert from lush green paradise. We visited the Egyptian Museum, which contains thousands of artifacts from three defining periods, the Old, Middle, and New Kingdoms. We entered several holy buildings. The Ibn Tulun mosque was probably my favorite; the image of our group, having been given cloth sacks to put around our feet, pacing across its enormous, empty courts surrounded by massive, ornate walls is hard to forget, as is the feeling of tranquility that I felt within it. A close second was Cave Church, a gigantic amphitheater cut deeply into the side of a mountain and only reachable through some of fastest, most crowded, and overall most stressful city driving I’ve ever witnessed. It was absolutely worth the hymn-singing acoustics.

My best memory of Cairo is largely our final afternoon and evening there. A dust storm had just engulfed the city when we set out to explore its sprawling street bazaar. The hazy brown air and overwhelming stimulation of the market scene didn’t discourage us from wanting to hone our bartering skills. I got in a bit too deep over a chess set I knew I didn’t have the space for, which made for some valuable bargaining practice at the cost of an awkward exit. We spent at least three hours in this market, and I found some good prices for gifts but still didn’t see nearly all of the shops. Directly afterwards, we were lucky enough to attend a performance of the Whirling Dervishes. This Islamic sect views their show of sound and movement as both worship and evangelism, and it is quite fun to behold. Envision a drumline accompanied by native string and flute players, a singer, and men spinning with huge, removable fabric around their waist, and you get the gist. Of course, it’s nothing like being there in the audience.

Then we moved to Anaphora. When we arrived at this community surrounded by sand, we were greeted by Father Antonio and Sister Sara, who told us some of its history. Anaphora was a desert in 1999. Since then, it has become an area of retreat, ritual, and residence. Nineteen-year-old trees stand tall, livestock are being raised, and simple plaster-domed buildings now sprinkle the grounds. It’s all largely thanks to the peacebuilding efforts of Bishop Thomas, who is Coptic Orthodox. We met Thomas the following morning and heard some of his insights on religious conflict amongst Judaism, Christianity, and Islam. That evening, our group attended a 3-hour liturgy to celebrate Epiphany. The language was mostly Coptic (similar to Latin), and at one point, “Kyrie eleison” was repeated one hundred times in chant. It was quite an experience, filled with candlelight and incense. The rest of our time in Anaphora has been spent relaxing, singing, reading, writing, eating, and sleeping, often on rooftops. It’s been a wonderful change of pace.

By this point, a few budding themes are already evident. Firstly, the inescapability of being an American tourist. This is something that a few in our group listed as their greatest fear for this trip. Many of us are striving to be the ideal, adaptable traveler, constantly trying new things and respecting all cultures without missing a beat. The reality is that this is so difficult due to the sheer number of nuances of different global perspectives we are facing that a healthy amount of grace for ourselves is necessary. We look, sound, and act like Americans in some ways that we can recognize and control and in many that we cannot. The hardest part is discerning which to work on and which to embrace as part of our own cultural identity.

Secondly, the joy of language discovery. Several of us took Elementary Arabic in the fall, but the immersion is a new experience for everyone. Arabic is not an easy language, partly because it has an entirely different alphabetic script system from English. It’s been a lot of fun reading signs as we drive by and piecing together the words that we actually know. Additionally, and a bit unexpectedly, American sign language has become a significant part of this experience thanks to my friend Graham, who is deaf, and his interpreter, Tristan. They’ve taught us a lot, and it really is satisfying to feel progress. It’s sparking a lot of great conversions about linguistic patterns and some of the paradigm shifts that speaking, even thinking, in a new language can create.

Thirdly, the complexity of the conflict that we are studying. In his recent talk, Bishop Thomas highlighted some interesting perspective on liberal and conservative attitudes in religion. Particularly, he focused on how stances of being open or rigid in views can affect both ends of the spectrum and how uncertain the ideal balance can seem. Our experience thus far, including orientation, has trained us to expect the issues of religious and ethnic intolerance to become more and more tangible as we get closer to Jerusalem.

It really has been a blast so far, with or without culture shock, and our group seems to be in good spirits. We wish our friends and families back home an enriching spring of their own as we set out for week 2 and onward of our journey.