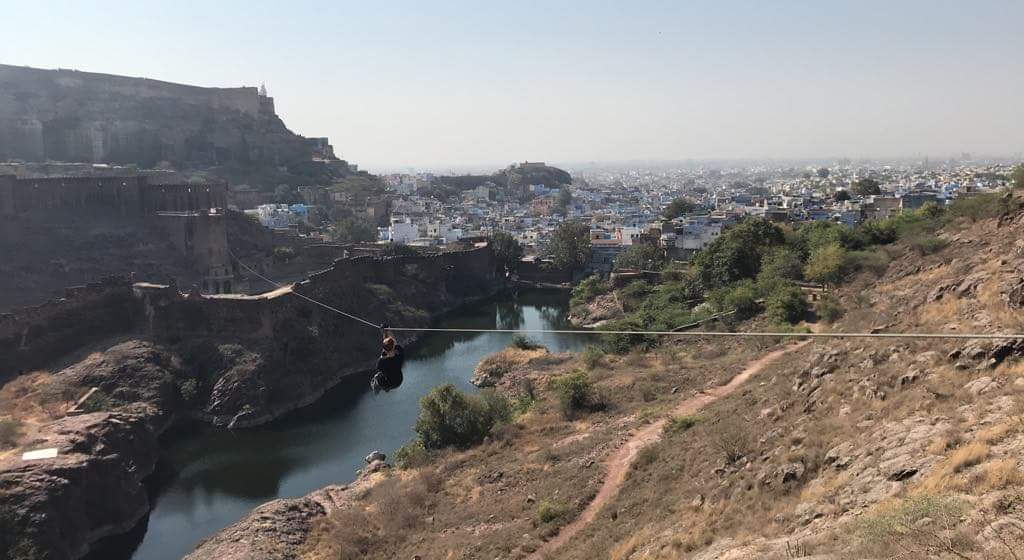 After our stay at the Sarang Center in southern India, followed by our spring break week, we traveled back to Delhi before heading into northwest India – into the state of Rajasthan. Rajasthan, in Hindi, means “land of kings” and is the ancient home of a collection of forts, palaces, fancy tombs, and Silk Road oases. Our activities during this period included zip lining over the blue city of Jodhpur, riding camels in the Thar desert, staying in a centuries-old merchant hostel (called a haveli), and embarking on an unsuccessful tiger safari. In Rajasthan, history is visceral; it pops out of the cities at you, while at the same time reconciling its colorful past with the complexities of a modernizing future.

Artist Statement: This drawing/visual processing journal entry was created during our return to Delhi after having traveled through various cities and villages in southern and eastern India. I was processing the connections that I felt in each of these spaces, specifically the connection to the Earth and all that is in it and surrounding it. -Kate Kauffman

Ode to a Displeased Camel

And now, the moment you have all been waiting for… the camel ride.
Sheer terror. Upon greeting camels, one cannot help but marvel at their size, poorly masked ferocity, and similarity to dinosaurs. Evan and I agreed to share a camel, and chose a pretty (looking) one to ride. I decided to sit in the front, and, with the go-ahead from the camel’s trainer, began to mount. The camel immediately roared to life and began staggering to its feet with a burbling shriek and spraying of effervescent foam. I was quickly thrown off, landing with a thud in the sand. Great start! Evan and I agreed it would be wise to choose another camel, and did so – Alex and Emerson claimed our original camel, and six people (allegedly) were necessary to hold the camel down in order for them to mount. The camel Evan and I ended up on was named Bintu, and seemed much more docile than our former beast.

The most terrifying part of camel riding is the camel getting up and down in order for its riders to get on and off; to get up, it first violently extends its back legs, plunging forward forcefully enough to make most riders doubt their ability to stay aboard, quickly followed by the aftershock of the front legs following suit.
Once the camel has gained its footing, the ride becomes somewhat less scary. We set off into the scrubby desert, clutching our camel fairly tightly. I would give a delightful description of our arid surroundings, but was admittedly, at this point, too focused on maintaining my adhesion to my newfound vehicle to marvel at the nearby plant life.
The destination of our ride was the peak of a large hill, from which we were to watch the sunset. This sounded idyllic; however, Evan and I discovered with slight dismay that this meant we would have to thread our way up a thin, sandy path that hugged the side of the hill. On my own feet, this would not have been a daunting task. The magnitude of the task increases quite significantly, however, when one finds themselves about eight feet from the ground on the back of a wheezing beast with an affinity for walking at an angle, it’s front and back legs seeming to lack communication with each other.

Despite our concerns, we reached the summit relatively uneventfully (if such a thing can be said about any camel riding experience). We dismounted in the expected roller-coaster-esque fashion and sat down to saturate ourselves with the waning rays of the evening sun (and perhaps to regain mental composure). I spent the break observing the camels with a mix of amazement and revulsion (they are truly disgusting creatures – the foaming mouths, the prehistoric wailing, the spongy feet… I could go on). They were framed neatly by the sun’s final light, the stately dunes and irrigated fields dotting the landscape. I am undecided as to whether these glorious surroundings spotlighted the horrors of the camels or lent them an odd air of royalty; either way, I certainly have gained a respect for them.