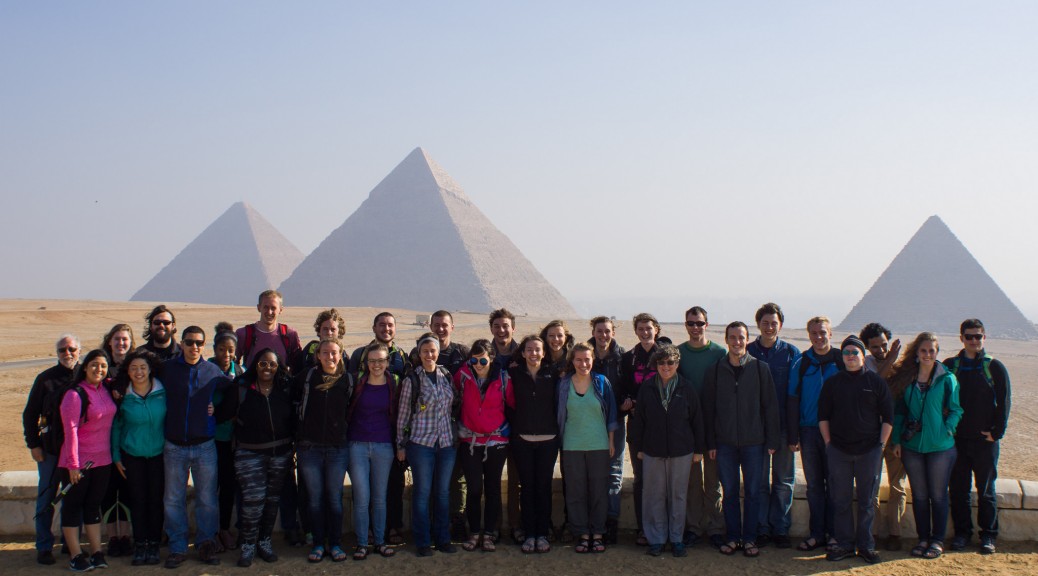 So, we are finally in Cairo and I am jet lagged, but am so excited to
see the Pyramids and the Sphinx. Cairo has a distinct smell to it, a
mixture of smoke and incense. The streets are chaotic and bustling
with life and everyone is trying to get you to buy something. The
streets get busier in the evening when the shops open up and there’s
traffic and cars everywhere. The people don’t follow typical traffic
laws and walk in between cars when and where they like. The drivers themselves aren’t law abiding citizens either. The constant honking is something that you learn to ignore.

When we came to the pyramids, we were all excited to see one of the Seven Wonders of the World. Was I really here? I felt adrenaline rush through me as we walked around and listened to the tour guide tell us the history of these amazing architectures. I honestly was expecting the pyramids to be further out into the desert, but they weren’t. They were right outside the city, and you could actually see part of the pyramid while driving up. When we came up to the third biggest pyramid, we all got tickets to get to go inside. It was a great
experience. It wasn’t anything out of this world, but just being able
to say “I was inside the pyramid”, is just the best feeling. Kind of
like bragging 😉 After we saw the pyramids, we went down to see the
Sphinx. There were so many tourists there and like everywhere else, the locals tried to sell us souvenirs. Later we went to a papyrus shop and saw how papyrus was made. We could also purchase some papyrus paintings there, and mostly everyone decided to get at least one. I am looking forward to seeing and experiencing new things.