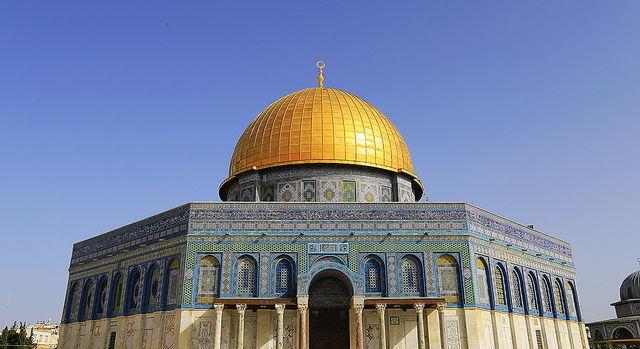 After a week of various independent travel experiences, all 30 members of our cross cultural made our way back to Jerusalem. Coming back to a now familiar city almost feels like returning home after a semester of almost never returning to a place twice. However, this week we had the new opportunity of lodging in the historic Ecce Homo Convent in the Old City. The ancient Roman road of the Via Dolorosa, the road that Jesus walked on to his crucifixion, runs through the basement of the convent, the victory arch made by Hadrian is built into the chapel, and the roof has a beautiful view of the Dome of the Rock. There really is nothing comparable to living in the heart of the Old City of one-of-a-kind Jerusalem.

Our focus for the week was learning more about Judaism, studying a bit of Hebrew, and of course visiting some more of the countless historical and Biblical sites in Jerusalem. This was the first time that Janet and Linford sent us off on quite a bit of independent exploration in the city. As great as our group is, it’s also nice not having to maneuver through crowded marketplaces with a group of 30 people. Some of the highlights of these explorations include walking the Stations of the Cross on the Via Dolorosa, visiting the Garden Tomb, walking on top of the walls of the Old City, and finally getting a chance to visit the Temple Mount after waiting in an impressively long line. Also, throughout the week we had about 9 hours of Hebrew lessons from out amazing teacher, Sarah. She taught us the entire Hebrew alphabet, quite a few words, and lots of songs, which have been stuck in many of our heads ever since. One of our more somber afternoons in Jerusalem was spent visiting the Holocaust Museum, Yad Vashem. While this wasn’t the most energetic of days, this museum definitely helped us to better understand the past of many Jewish Israelis in a meaningful way.

Eventually (March 23rd to be exact), the time came for us to leave Jerusalem, the city that became many of our group members’ favorite city on the trip so far. We headed back out to the Galilee, where we had briefly visited with JUC already, but this time came to stay at a kibbutz in Hannaton. A kibbutz is an agriculturally based intentional community. Some have completely shared resources among members, while others like ours have more independent families. This week in the Galilee region was planned and led by our guide Lori, a Jewish American who immigrated to Israel just a few years ago. Our schedule included a wide variety of lectures and “mifgashim” (face to face interactions) with everyone from Israeli college professors to descendants of Holocaust survivors, to soldiers fulfilling their 2-3 years of service in the Israeli army. These “mifgashim” were some of the highlights for me personally. Israeli young adults are some of the most articulate people I’ve ever met, and I learned so much about their individual beliefs as well as the beliefs of Israelis as a whole. And I think that all of us in the group have gotten pretty good at explaining both the purpose of our trip as well as who Mennonites are, after having to explain these so many times.

Our week in the Galilee ended with a free day to explore the coast city of Akko before we headed to our next and final location in Israel, the town of Nazareth. This semester has kept us moving right along through locations and information, and even so, we are still just skimming the tip of the iceberg when it comes to learning everything about this fascinating part of the world.