Seeing the cities of India it is easy to believe that India is the second most populous country in the world with well over 1 billion residents. Ironically estimates place the rural population of India well in the majority with around 70% of the population living in towns, and villages of less than 1,000 people. A couple of days ago we met up with a group called SIDH that is working to improve education in some of these small villages in the Mussorie region of the Himalayas.

We divided ourselves up into 3 groups, each of which went to a different village. The village (Matella) I went to is located on the side of one of the mountains in the Himalayan ranges of India and consisted of 9 joint families (multiple relatives) totaling less than 100 people. The village is almost completely self-supported by farming. They don’t sell any of the crops that they grow; everything goes towards feeding the village. Each family is responsible for a portion of the 1 square kilometer of fields surrounding the village, but when it comes time for harvesting or other labor intensive activities the rest of the village pitches in too. Having grown up surrounded by fields of corn and wheat in northwest Ohio, seeing farming like this doesn’t even seem to compare. A field can be anywhere from fifty to a couple hundred yards long and varies in width from 10 to 30 yards wide. To get from field to field the villagers take something comparable to eroding goat paths that go almost straight up in some places and zigzag back and forth in others.

While there we helped them out with some of their farm work. Up by the school house there was a pile of cow manure that had been mixed with straw and left to sit long enough it was at least beginning to compost. One man and around seven women loaded up bags with around 25-30 lbs of manure, had us put them on our heads (you got chewed out if you tried to carry it any other way), and led us zigzagging somewhere from 200 to 300 feet down the side of the mountain to a field. When we would start walking faster on the way down or even up, the only one of the women who spoke English (a twelfth grader who normally went to school fifteen minutes up the hill by her reckoning) would tell us to walk slower and then continue asking us questions. One person in our group made the comment that here they work at a slow, casual speed all day and at home we work really hard, then take a break, then work really hard again, and take another break. In a community like Matella, the everyday tasks like farming and cooking are carried out without hurry or abandon. At this slower speed things get done just as well, the only difference is that you find time for communication and inevitably community along the way.

This past Thursday was a one day glimpse of the highlights of Amritsar, a city in the Indian state of Punjab. We first walked around Jallianwala Bagh, the site of the Amritsar massacre and memorial for the 319 lives of non-violent Indian protesters who were murdered by British soldiers in 1919. The Indians had been peacefully rallying against unjust treatment by British troops, giving testimonies about the abuses they had suffered, when 50 soldiers were ordered to fire on the crowd. As I stood staring at the bullet holes in the surrounding brick walls I took time to mourn the injustice and grieve the lives that were lost, praying that God would use that place as a reminder that lives are infinitely more precious that the struggle for power.

Next we visited the famous Sri Harminder Sahib (aka the Golden Temple), a place of worship for Sikhs.  Before entering the huge compound we removed our shoes, washed our feet, and covered our heads. Thousands of people come to worship at the Golden Temple each day so we waited 30 minutes just to get a glimpse of the inside of the temple. Of course, it was an Indian style line which meant that you crammed as many people into the space as physically possible (and then a few more yet), and in order to keep your spot in line you have to constantly be pushing against the people in front of you. After glancing around the temple and making friends with an old man with a scraggly beard (which involved shaking hands and smiling and nodding as he kept talking in a language we couldn’t understand) we headed to the dining hall for lunch. Every Sikh temple serves two free meals everyday for anyone in the world- they will turn no one away. We got a behind-the-scenes tour of the kitchen where they cook the dal and curry in enormous pots and ‘manufacture’ chapattis by the hundreds. The many cooks, dishwashers, and servers are all local people who take an occasional day off to volunteer at the temple kitchen. When it came time to eat we sat on the floor in rows in a huge room filled with people. Our food was served to us from huge sloshing buckets and baskets piled high with chapatti. To receive the chapatti we reached out our open hands in the style of a beggar- a symbol that no matter what caste, creed, sex, or religion, we are all equal in God’s eyes.

We finished the day at the Wagah Border, the boundary line between India and Pakistan where the border security forces from both countries perform a special sunset ceremony. We sat on concrete stadium steps in an arena that seat 6,000 people, though they manage to fit in 8,000-10,000 each night for the ceremony as it is a highly attended event. From our seats we could see the Indian and Pakistani iron gates separating the two countries and beyond that a similar looking stadium on the Pakistan side.  The ceremony consisted of a very random flow of events including shouting chants as a crowd, trying to out-scream the Pakistan side, and watching the border security force guards, dressed in elaborate uniforms, as they marched, kicked, high-stepped, shouted, and blew their bugles. The gates of the border were opened and closed a few times throughout and the culmination of the event was the lowering of both countries flags. It was entertaining to watch but I couldn’t help feeling like I was in the cheering section of a high school sports game trying to build team spirit and shame the other team. For our dinner grace that evening we sang a verse of “Blessed Be the Tie that Binds” – a beautiful reminder that in God’s kingdom there are no borders or nationalities, but instead a single body of brothers and sisters each created in the image of God. 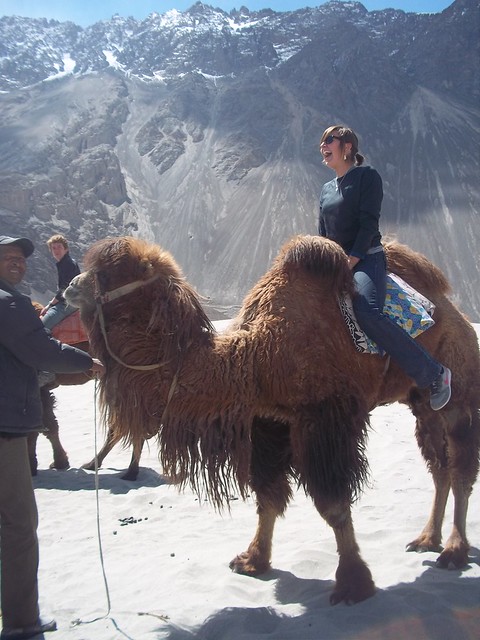