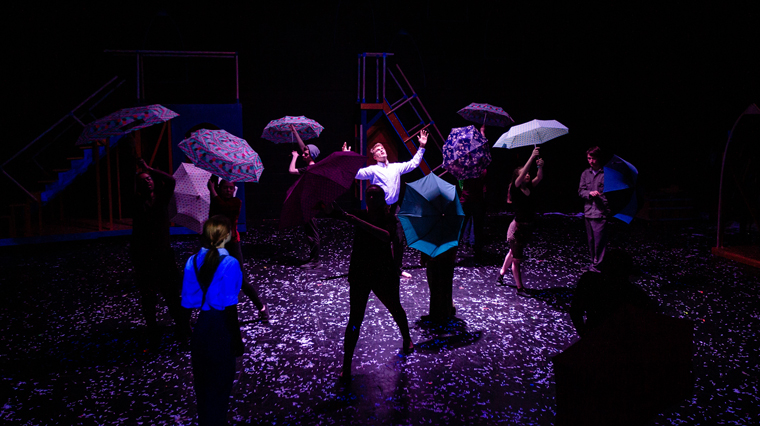 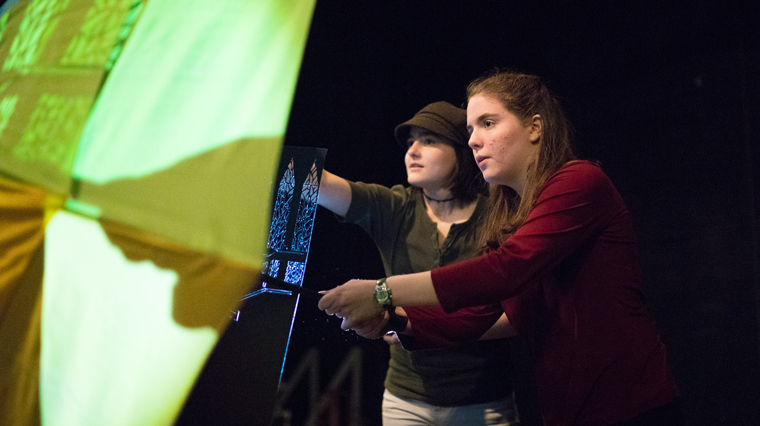 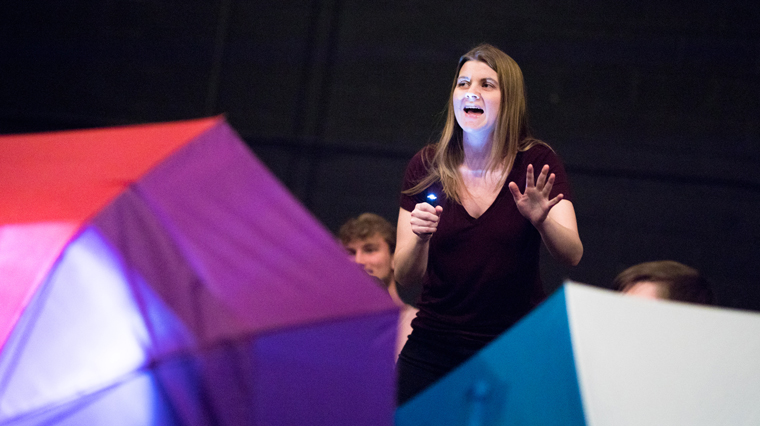 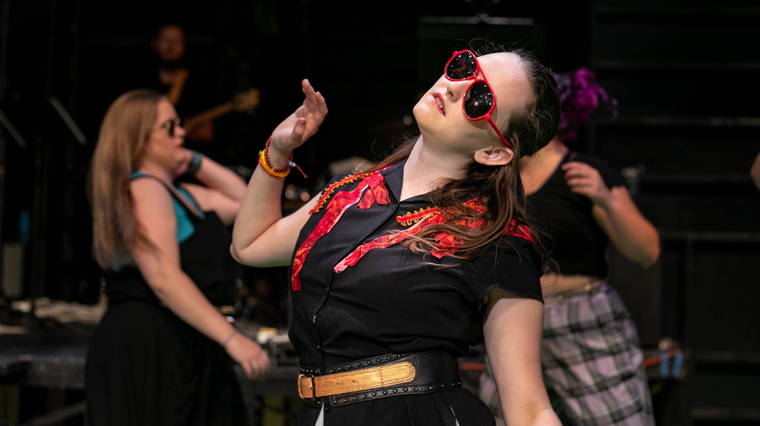 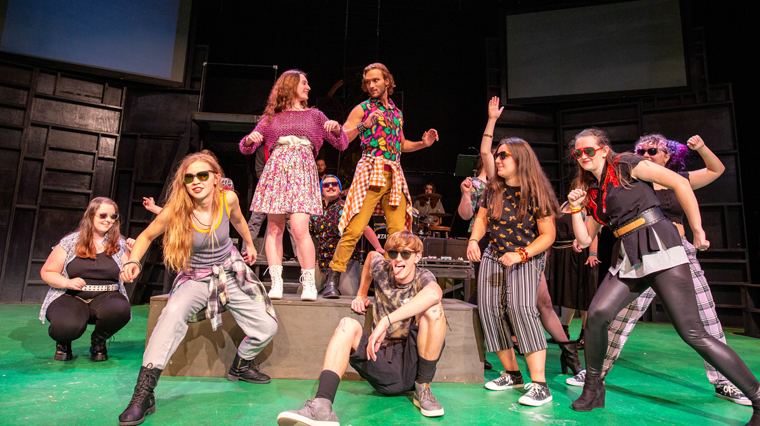 Develop your skills in acting, singing, and dancing in a supportive environment of highly skilled, award-winning professionals and college faculty.

Explore musical theater in this three-week program culminating in multiple performances of a musical revue. No audition is required.

Register and pay for the camp

Explore a performance track or a technical theater track for three weeks culminating in the presentation of a major musical production on the main stage.

Performance Track - You will engage in all morning classes and rehearsals and will perform on stage.

Technical Theater Track - You will engage in all morning classes. In the afternoon you will work with the costume designer, technical director, stage management team, and others to support the production in all technical areas.

$1,200 (includes full days of instruction and rehearsal as well as three performances)

Register and pay for the camp

Email summermusical@emu.edu with any questions. 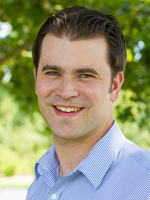 Justin Poole, Ph.D.
Associate Professor of Theater and Theater Program Director
EMU Summer Musical Theater Co-Director and Theater Director
Justin holds an MA in Theatre from Villanova University and a Ph.D. in Theatre and Performance Studies from the University of Maryland. Justin, along with his wife, Amanda, led a semester-long cross-cultural program to Europe, where Justin has spent significant time studying experimental performance and art. At EMU, he has directed The Spitfire Grill, The 39 Steps, Into the Woods, Twelfth Night, Measure for Measure, Disney’s Beauty and the Beast, Shrek:The Musical. Justin co-created and directed an original rock musical using Shakespeare’s Romeo and Juliet and the music of U2. He also adapted and directed Distant Witness: Social Media, the Arab Spring, and a Journalism Revolution. Justin co-created and performed Bonhoeffer: Cell 92, The Gospel Project, and Firebrand: The Life of Paul. As an actor, Justin has also appeared on national television shows and commercials. He is Artist-in-Residence at Asbury United Methodist Church, an oil painter, and a certified yoga teacher. He is a proud father to Vienna, Felicity, and London.

Ellie de Waal is a freelance dance artist based in New York City and Virginia.A native of Harrisonburg, VA, she is a co-founder of the Harrisonburg Dance Cooperative. Ellie has a BFA in Modern and Contemporary Dance from Texas Christian University where she trained under the TCU faculty and other dance artists including Heidi Latsky and Robert Battle. She spent a year training in the Netherlands at Danshuis Station Zuid under the direction of Andrew Greenwood and danced works choreographed by Itamar Serussi Sahar, Rocco Vermijs, and Tomoko Stalpers-Kato. Ellie was a part of several touring projects with concorDance Contemporary of Charlottesville, VA and the Harrisonburg Dance Cooperative as a dancer and a choreographer and was choreographer and featured dancer in an Off-Broadway production of "Savage Force", an original play. Throughout her more than a decade of professional experience, Ellie has freelanced as a dancer and choreographer for universities, festivals, and guest artists works in concert dance, opera, musical theater, and experimental theater.  Her works have been adjudicated by the Kennedy Center and selected for several festivals including the Richmond Dance Festival.  Her most recent choreographic work was for her dance film "Embodying Emily", a creative imagining of a moment of self-reflection and illumination by Emily Dickinson. When Ellie is not dancing or choreographing, she teaches Pilates and fitness in NYC and in Virginia.

In fifth grade, Jim performed as one of the gingerbread children in “Hansel and Gretel” at Goshen College in Indiana, the school where he later earned a degree in music. Throughout his school years and during the several decades since, he has been involved in dozens of shows as a rehearsal pianist, and performed on stage and in pit orchestras on various instruments. Jim also composes a variety of music, including songs and underscoring for musicals. At EMU, he wrote, arranged, and performed music for “Twelfth Night,” “Measure for Measure,” “The 39 Steps,” and “Distant Witness.” With Justin Poole, he co-created and performed in “The Gospel Project” and “Firebrand: The Life of Paul.” Jim has directed music for shows at EMU, James Madison University, and Eastern Mennonite School. He works as an accompanist and performer for shows, classes, and voice lessons at the School of Theatre and Dance at JMU.

Shannon Dove
EMU Theater Technical Director and Resident Designer
Shannon is a local grad of JMU and Broadway High School. He has been a scenic artist, master electrician, master carpenter, master painter, technical director, and overall crew chief at EMU since 2002. He has worked to produce theatre for various organizations at the college, community, and professional levels. In addition, he is currently scenic artist, co-technical director, and adjunct professor of theatre at Bridgewater College. Shannon is also an avid musician.
Rachel E. Herrick
EMU Theater Resident Costume Designer
Rachel is a JMU grad with a B.A. in theater and dance. While at EMU, Rachel
designs costumes, manages the build of costumes, and does much of the costume construction. Her EMU design credits include Measure for Measure, Disney’s Beauty and the Beast, and Pride and Prejudice. Rachel spends her summers working with Charlottesville Opera, where she was wardrobe supervisor for The Tragedy of Carmen, and assistant wig supervisor for Camelot during the 2019 season. More information about Rachel’s credits can be found at www.racheleherrick.com.

Anna Hoover
Anna is a biochemistry major, minoring in theatre from New Carlisle, OH. At Tecumseh High School, she was a part of many productions, her favorites being The Little Mermaid (Ariel) and Fiddler on the Roof (ensemble). She was also in The Vandalia Youth Theater’s The Hunchback of Notre Dame (chorus) and Chitty Chitty Bang Bang (Inventor). She was a part of EMU’s U2 Romeo and Juliet: An original Rock Musical (Benvolio), Pride and Prejudice (Lydia Bennet, Miss de Bourgh) and Shrek: The Musical (Wicked Witch and other roles). Anna also works as the promotions assistant for EMU Theater.
Greta Schrag
Greta is a Political Science and Sociology double major with a minor in Community Organizing and Development from Harleysville, PA. In high school, she was part of Dock Mennonite Academy’s productions of Newsies (Kathrine) and The Sound of Music (Liesel). She played Juliet in EMU's production of U2 Romeo and Juliet: An Original Rock Musical, and last spring she was a part of Shrek: The Musical (Teen Fiona).
Joseph Seitz
Joe is a math major with minors in computer science, music, and honors from Harrisonburg, VA. At EMHS, Joe was seen in Brigadoon, The Pirates of
Penzance (The Pirate King) and A Midsummer Night’s Dream (Oberon). Also at EMHS, he served on the tech crew for Charlotte’s Web, was assistant director for Anne of Green Gables, and lighting director for The King and I. At EMU, he served as assistant director for Measure for Measure and was in Disney’s Beauty and the Beast (Lumiere, Broom Guy), Pride and Prejudice (Darcy) and Shrek: The Musical (Donkey).
Hannah Landis

Hannah is a Spanish Language & Hispanic Studies Writing Studies double major with a minor in Honors from Sellersville, PA. At Dock Mennonite Academy, she was part of many productions, her favorites being Much Ado about Nothing (Beatrice), The Sound of Music (Elsa), Joseph and the Amazing Technicolor Dreamcoat (Narrator), and The Man Who Came to Dinner (Lorriane). So far at EMU, Hannah has worked some informal organizational/creative roles in the theater department.