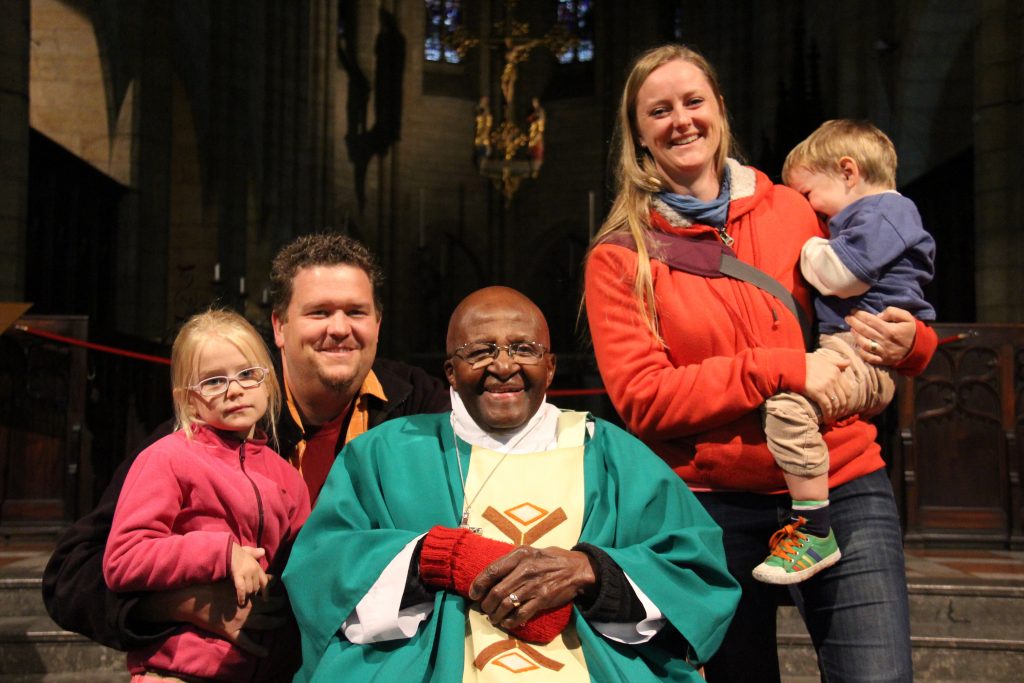 December 26, 2021, was a sad day. That was the day the world learned of Desmond Mpilo Tutu’s death. The world lost a giant moral figure in a very small physical frame.

My family and I had the privilege of meeting Tata (Father) Tutu five times; four times while we lived in South Africa and once while we took a class of U.S. students to South Africa to learn about its story. Each of our children were touched and blessed by the Arch. (He often spent a considerable amount of time playing peek-a-boo with our children!)

Tata Tutu will rightly be remembered for his faithful and steadfast witness to God’s desire for justice, peace, and reconciliation in our world. Although this work and his witness emerged in the struggle against apartheid and its racially segregated social engineering project, it did not end there. He campaigned for peace, justice, and reconciliation in many other areas. He spoke out against the Iraq war; he called into question the ongoing dynamics in the middle east and the neo-apartheid reality that Israel has created; he challenged internal church-related issues such as LGBTQ inclusion; and much more. Much can be (and will be!) said about all of this. I want to focus on three particular lessons that I gleaned from Tata Tutu.

Tutu became renowned for the way in which he challenged the apartheid regime and its system of hatred and violence. And yet his prophetic challenge was consistently invitational. In calling out the apartheid regime and its violent and hate-filled policies, he would always invite the actors that enacted apartheid’s policies to step away from its policies and join the struggle against apartheid’s dehumanizing ways.

“You may have the guns,” he would say; “you may have all this power, but you have already lost. Come: join the winning side.”

Tutu recognized that the apartheid system did not only dehumanize those which it subjugated, but it dehumanized those who perpetuated apartheid’s policies as well.

2) We are all interconnected.

Tutu was perhaps one of the greatest proponents of ubuntu, a concept that highlights one’s interconnectedness with everything and everyone. It originates from the Nguni group of languages and has become short form for umuntu ngumuntu ngabantu, which means “a person is a person because of other people.” Tutu recognized and helped us recognize the ways in which we are interconnected. Throughout the struggle against apartheid and the early years of South Africa’s democracy, the concept of ubuntu highlighted the way in which apartheid and its separation and exclusion attacked not only one’s dignity, but one’s humanity!

Tutu regularly referenced the notion of ubuntu as he challenged the logic and separating practice of apartheid. “My humanity,” he would remind people, “is bound up, is inextricably bound, with yours; and yours with mine” (No Future without Forgiveness, 31). It was precisely this understanding of interconnection that motivated Tutu’s work to not only free those that the apartheid system described as “not-white,” but free the oppressor as well!

Ubuntu means that in a real sense even the supporters of apartheid were victims of the vicious system which they implemented and which they supported so enthusiastically. Our humanity was intertwined. The humanity of the perpetrator of apartheid’s atrocities was caught up and bound up in that of his victim whether he liked it or not. In the process of dehumanising another, in inflicting untold harm and suffering, the perpetrator was inexorably being dehumanised as well.” (No Future without Forgiveness, 35)

If working for peace means confronting and talking with your enemies, and if this is done because we are all interconnected, then reconciliation is both necessary and a logical outcome. Tutu reminded people that reconciliation means to work at restoring right relationships. Wherever injustice and oppression exist, relationships are not right, things are not as they should be. Thus, reconciliation should not become equated with some form of “soft” attempt to try to find middle ground.

Tutu was unequivocal that God was found among those who are oppressed, exploited, and dehumanized. Reconciliation was not an effort to find or negotiate some kind of middle ground. Rather, the work towards reconciliation recognizes that relationships with fellow humans, with creation, and with God are broken. Reconciliation, therefore, was an active way by which to envision and live into a new reality that was not determined by past brokenness. Reconciliation sought to imagine and establish new relationships that could offer a better expression of God’s desired justice and peace now in this world.

Not only will I miss Tutu’s infectious laugh, I will miss Tutu’s tireless pursuit toward a better and life-giving future. We have lost not only an incredible role model; we have lost one of God’s champions for a more just and reconciled world.

Rest well, Tata. May we seek to embody the many lessons you have provided in our quest to make God’s kingdom a reality on earth as it is in heaven.

Andrew Suderman is Assistant Professor of Theology, Peace, and Mission and program director of Bible, Religion, and Theology at EMU. Read more about the 2019 trip to South Africa at the EMU Intercultural Blog and learn more about EMU’s intercultural programs at their website.