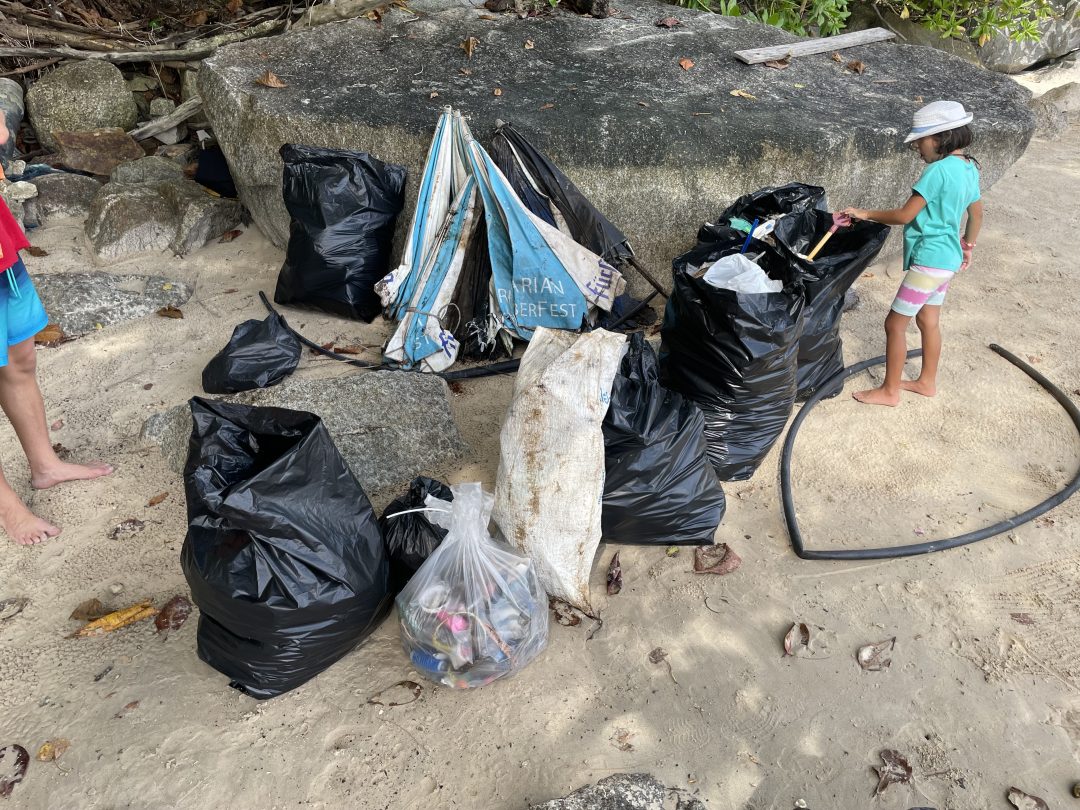 While on the Southeast Asia cross-cultural, we have been exposed to a new location, language, and culture. These spectacular experiences come as no surprise considering the history of the EMU program. But as we spent our first two weeks on the gorgeous paradise island of Phuket, Thailand, a popular tourist destination, we were exposed to something we did not anticipate: an abundance of plastic.

As we explored the island and the pristine white beaches the first few days, I couldn’t help but notice how free most public places are of trash and debris. I shrugged it off as a cultural difference in attitudes towards littering and trash collection (it was common to see workers sweeping up any trash or debris on a daily basis, keeping the clean paradise “dream” alive). It wasn’t until the first storm hit a few days later when that “dream” started to fall apart.

The first shoe dropped when walking to the local markets by way of a nice beach stroll. The tide had receded after the storm and left behind a solid trail of “micro plastics” that were not visible until standing directly over them.

The “dream” continued to crumble in the following days and my initial theory of cultural difference could no longer hold true. The beautiful island paradise is also a victim of the relentless consumption and single-use plastics. Almost daily we would walk along the beach enjoying the sun and sand when we would find an array of marine life lying dead on the sand. Most of the time it would be an unsuspecting Blowfish.

Micro plastics have become a major cause of death and deformity in marine life in Southeast Asia in the last few decades but there is growing concern of these plastics finding their way into humans through the consumption of things such as seafood and salt. Both are major elements of Thai culture. The growing concern is for the effects of the accumulation of micro plastics in human bodies, which until recently has not been thoroughly studied. It is known that the chemicals in plastics can cause a range of health problems such as inflammation in tissue, cancer, and infertility.

In the United States, we are well conditioned to “push aside” the effects of our waste through our waste management systems which allow us to not be constantly reminded of the long-term effects. Here in Thailand, we are acutely aware of our trash and where it all eventually leads: back to the ocean.

As a group, we decided to attempt to offset our carbon footprint from the long flights to come to the country by having a trash pick-up event on the beach. We collected gnarled fishing nets, lighters, shoes, and beach umbrellas. Enough to fill six large trash bags to the brim.

As we cleaned up more and more I was constantly reminded of the trash we couldn’t remove: tiny Styrofoam balls, nets, and rope lodged in crevices, and of course, the trash that has been layered beneath the sand and on the ocean floor. It causes me to wonder, will life adapt and learn to live with our mistakes? Or have we opened a door that will leave nature almost unrecognizable to future generations?

The environmental cost of our waste will increasingly haunt us, forcing us to eventually come to terms with our excessive consumption and infatuation with convenience. So is the “dream” over? It’s up to all of us to believe in a better future for ourselves and our children.

Jacob Horsley is a double major in Peacebuilding & Development (PXD) and Computer Science at Eastern Mennonite University and is currently on a semester-long cross-cultural in Thailand.