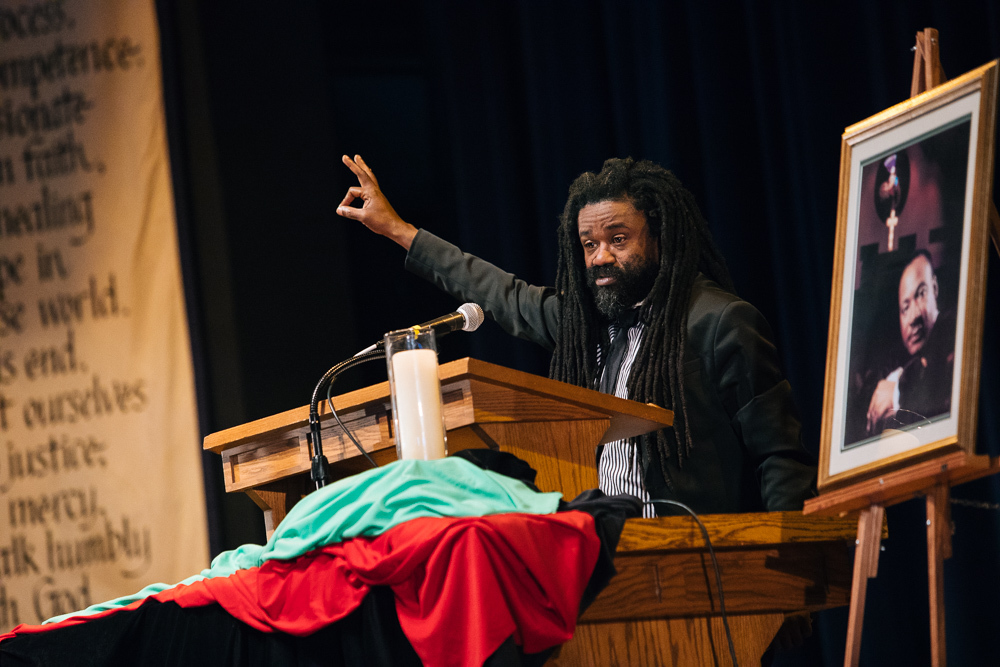 Giving tours this week, I felt within myself a surge of excitement when my group and I walked past the MLK holiday book section in the library. I knew that in the next moment, I’d open my mouth and out would spill my excitement for what EMU did so differently this year. I would smile and share how this act reflects the vision we are moving towards as a community: “So this year was our first year that we took a day off – but really a ‘day on’ – for the celebration of Martin Luther King Jr. and the leadership with which he guided his people through the Civil Rights Movement.”

I go on to explain what I learned about the man – that he was intelligent, yet inconsistent, a visionary, yet very imperfect. If I’m walking slow enough to fit in all these words between the library and the chapel building, I get into how this day sparked conversation for me and, on campus, about what non-violent protest is in its truest form, the variations within it, the ways that it has been done, and the ways that it doesn’t always do what it intends to do. Workshops, like the non-violent resistance one I attended and plenty of others, took place. There were many activities that occurred as well – a march, a trip downtown to Harrisonburg’s Harriett Tubman Cultural Center, the opening of the EMU Barbershop, and a movie showing.

And then, if my tour group isn’t sick of me yet, I ramble on about what brought me the most life on MLK Day – our speaker for convocation, Reverend Sekou. He is many things. Wise, with an admirable precision of words. His tone always hints a playful pinch of salt and sass, as he moves through any space with an energy that I found very intriguing. He’d prefer the title of “organizer”, but arguably he’s an activist at heart. He’s also a theologian, as “Reverend” would indicate. In a conversation with him, he insisted I check out his alma mater Union Theological Seminary, a place he said connects many significant protest organizers of our time. It is time for the youth, whom “those working the plantation fields willed into existence”, to be propelled forward and defended at all costs (yet – and he said this smugly – redirected by wise sages such as himself when the cameras aren’t on).

He is a musician: music is his joy. I saw him speak twice – once at Bethel AME and once at convocation on MLK day. Though his approaches to these two services were different, his magnetism to the piano and whoever was playing it was the same. On Monday morning, my eyes followed him as he slid down next to Earnest on the piano seat at the first chance he got. When the mic was in his hand, he gripped it with the same conviction his words held. All of him was within the music, the melody, the vibrations of the piano. From a face covered in thick dreads, he cried a bent-over cry… a cry that ironically exuded both unshakable joy for the gift of life and music, and painful, soulful calls for liberation.

On EMU’s first MLK day fully celebrated, voices such as Reverend Sekou broke the silence. I left Monday feeling grateful to have been part of the cracking.

Ariel Barbosa is a Bible and Religion and Sociology dual major at Eastern Mennonite University. (Photo by Andrew Strack)