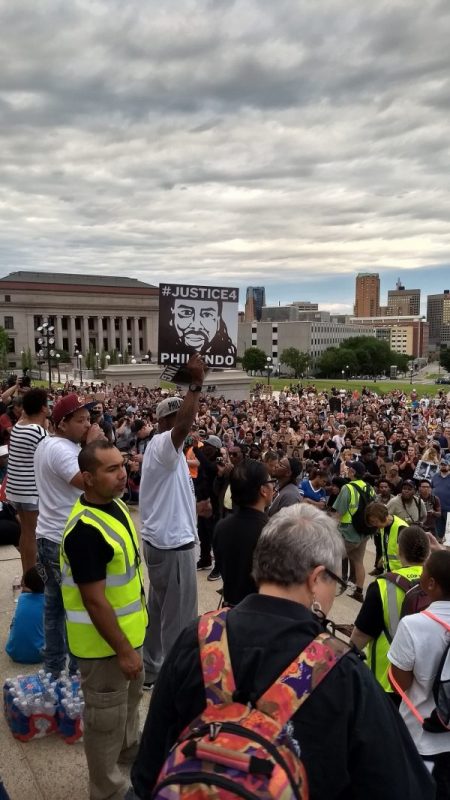 The Face of Systematic Racism (Part 2) by Katrina Poplett

This post is the continuation of a reflection I wrote in the midst of my Peacebuilding & Development summer practicum doing restorative justice work in Minneapolis, MN with the organization Restorative Justice Community Action. My reflection centers on my interactions with a woman who had been abused by the U.S. judicial system. To read the first part of my reflection, click here.

This world is ignoring her as they have ignored her mothers for generations, silencing their cries with the promise of a better life for everyone except those working for it. It ignores her as she cries in this room, not even close to large enough to contain the mess and injustice of generations of trauma and abuse, ignorance and greed that is now being re-legalized.

We’ve shown her that Black Lives Don’t Matter. So why not tear the rest of her down too? Housing is only available if she’s on drugs or has two kids instead of one.

She says, “I’m lucky to be alive,” and her son says, “Mama’s crying.” All I’m thinking is that too soon he will be crying too and then he will stop crying because he will be seen as weak and given a label that makes him hate himself so he’ll learn to keep everything in and learn to put his hands up so they don’t shoot and learn that no matter what the police are right, all before the age of 9 because he will be a suspect by the age of 6.

I’m looking into the face of systemic and institutional violence. I’ve never understood the system so clearly as I do in this second. My heart’s pounding and my eyes are full of tears as I swallow back my words and listen. Nothing I can say or do but listen and hear her story, her suffering. For all our differences, I am human too. And this is what I can do. I can hear my sister suffering and I can look her in the eye and hear her. Show her that, for once, she will not be ignored.

But tonight and tomorrow and the day after that is when my true test will come. Will I continue to see her? Others like her? Can I show up?

And if the answer is yes, then maybe, just maybe, I can start to see her world. And her pain.

After writing this, a week or so later a meeting a occurred with this client and a police lieutenant. After hearing her story, he responded with this simple statement:

And in that moment, everything was changed. These two people, coming from different perspectives, life experiences and beliefs understood and empathized with the other, feeling compassion, pain, and love. As the facilitator, I witnessed this interaction and restorative conversation transform the feelings and perceptions everyone held. By posing restorative questions and simply holding a space for these two people to come together, the trauma and conflict were transformed into awareness and comprehension. It was beautiful. It reminded me of how restorative justice has the ability to change lives. Trusting an alternative process is difficult, and at times, quite risky to do. But when done correctly with questions framed with curiosity and openness, as this conversation was, people come away with their harms heard and addressed.

Even though I have seen the power restorative processes have, I am constantly challenged to answer this question: Is a restorative system better if it only funnels black and brown bodies to this alternative system? I wish I had an answer to give, but I’m still working on how to answer this. However, this isn’t to say that we should give up restorative processes. I believe that restorative processes change the people who go through them while also hearing the experiences of a person that led to a particular point in time. Hopefully, by listening to people’s stories and bringing people who have been harmed and who have done harm together, we can start to create a system that does not mirror the prejudices, biases, and racism present in our current judicial system.

Restorative Justice, part of the Peacebuilding field, poses an alternative to the retributive justice systems that are the norm in the United States and other nations about the world. For further reading on how restorative justice works and has the potential to be used, I recommend reading Changing Lenses: Restorative Justice for Our Times by Howard Zehr, or Ambassadors of Reconciliation: Diverse Christian Practices of Restorative Justice and Peacemaking by Elaine Enns and Ched Myers.  For further information on how to get involved in the work of dismantling racism, check out Roots of Justice, Showing Up for Racial Justice, and the Black Lives Matter Network.

Katrina Popplett, a Minnesota native, is a student in the accelerated BA (Peacebuilding & Development) to MA (Restorative Justice) program at EMU, a collaboration between PXD and the Center for Justice and Peacebuilding.