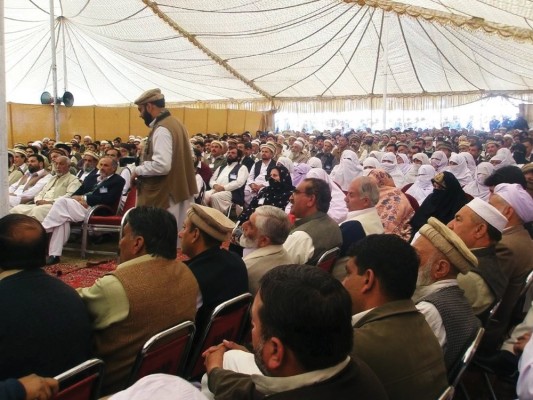 Ali Gohar, MA ’02, is working to update the traditional system of jirga in the border areas of Pakistan and Afghanistan. He believes passionately in the core function of jirga, whereby certain elders are recognized in their communities for their wisdom and ethics; these elders gather to make community-wide decisions, resolve problems, and dispense justice.
Gohar has been encouraging jirga’s elders to incorporate current principles of human rights, conflict resolution, reconciliation, and restorative justice into their deliberations. Part of updating jirga, says Gohar, is building a relationship between its members and government officials, so that they work in a complementary way rather than being at odds.

These photos, taken in Mardan, 45 kilometers from the provincial capital of Peshawar, show such relationship building. Malik Naveed (pictured speaking above), is the top police official for the North West Frontier Province (NWFP), one of the border areas gripped by the “war on terror.”

Naveed not only appeared at this Gohar-organized public gathering on February 2, 2010, he announced that “reconciliation committees” would be meeting regularly with community elders at each of the 17 police stations in Mardan. Naveed expressed hope that “fear and terror about police officials in the hearts of the people would be eradicated and trust and brotherhood restored in society,” according to a report in a Pakistani newspaper.

This large public meeting – notably attended by women – reflects Gohar’s efforts to see that all parties have a common understanding of the principles of conflict transformation, jirga and restorative justice. Each reconciliation committee is mandated to include three women, an unprecedented step.

Gohar, co-founder and director of JustPeace International, is on familiar ground working in the border areas of Pakistan and Afghanistan. His ethnic-linguistic group is Pashtun, whose members are distributed widely on both sides of the border. In Pakistan, he has worked mainly in NWFP, Punjab, and Baluchistan. In Afghanistan, he has worked in Kabul and Jalalabad.

Gohar has organized trainings for more than 1,000 community elders, 500 police officers, 350 civil society members, 300 women activists, and 100 non-governmental organization workers. He also works through TV, radio and print. He has developed: more than 20 TV and radio shows dealing with conflict issues; a dozen booklets on aspects of restorative justice, conflict transformation, and peacebuilding, which are distributed widely at the grassroots; and three books, including one on jirga and another on restorative justice, co-authored with EMU professor Howard Zehr. He has played key roles in 40 national and international seminars, including organizing Pakistan’s first international symposium on restorative justice seven years ago.