reprinted with permission by Liesl Graber and The Weather Vane

What do you get when you cross Amish romance novels, vampires, and a college community? Apparently, an evening full of laughter and cherry-flavored vampire dentures.

Students and staff gathered around a fire pit on Oct. 27 to see what “Vampires with Vi,” advertised around campus prior to the evening as a “spine-chilling story-telling event,” was all about. With warm blankets over their laps and hot mulled cider in their hands, the guests stared into the fire and listened as writing professors Vi Dutcher and Kirsten Beachy — as well as special guest Sofia Samatar —read “terrifying tales” aloud.

These tales were not just the average ghost story, however. These tales were Amish vampire romance novels, a genre that Beachy nicknamed “the bonnet suckers,” much to the amusement of the group.

“One of the requirements of reading this [tonight] is that it must be read with all seriousness and drama,” Beachy said.

“Much drama,” Dutcher added, leading the group in another round of laughter.

Samatar, who recently visited campus for the Writers Read event on Sept. 14, began the reading with an excerpt from Leanna Ellis’ novel “Plain Fear.” The novel follows the tale of a young couple in an Amish community after the young man leaves to “sow his wild oats” in New Orleans. “Oops! There’s voodoo, there’s vampires, and he gets turned into a vampire,” Samatar said before reading the passage.

“I paid money for it. I confess,” Beachy said. Samatar confessed to requesting the book through Interlibrary Loan for “academic purposes, of course.”

“Plain Fear” exemplifies the Amish vampire romance novel, but there is more to this genre, Beachy noted: add the extra dimension of science fiction and you get Kerry Nietz’s novel “Amish Vampires in Space.” The novel recounts the struggles of a hitch-hiking Amish community hiding amid vampires in the cargo bay of a space “buggy.” While reading, both Beachy and Dutcher often had to pause until the group’s laughter subsided.

“I couldn’t believe that someone genuinely wanted that story to exist,” said sophomore Clara Weybright after the reading. “I also wanted to know if it was purely for marketing, that people are going to buy this, or if it was a good story to tell. Are people crazy enough to buy this?”

The mash of genres confused other students as well. Sophomore Hannah Wheeler said, “It almost feels like it was someone betting them, like they said, ‘I bet you can’t take these seriously.’”

“I also love that Vi couldn’t shut off her editor self,” said Weybright. “She kept stopping in the middle and saying, ‘Oh, this is such bad writing!’”

Aside from the stories, students enjoyed the aesthetics of the decor and party favors, from the cloves of garlic — which looked too similar to the donuts, noted professor Owen Byer — to the table tiki torches, to the cherry-flavored vampire teeth Dutcher passed out at the beginning of the event. “I bit through mine. I was excited,” said sophomore Matthew Troyer of his pair of teeth. “I must have laughed too hard or something.” 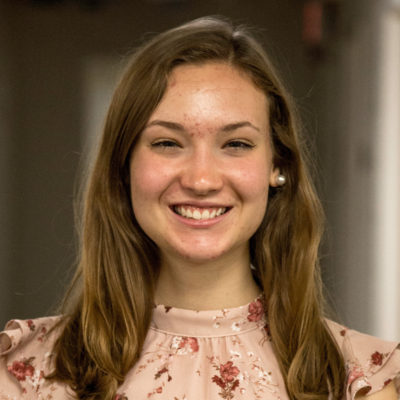