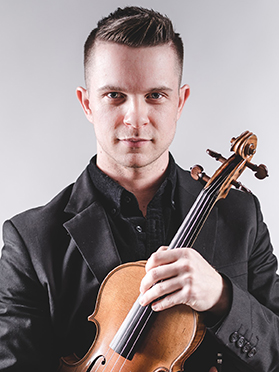 Born in Okinawa, Japan to an Air Force family, Jacob “Jake” Roege spent his early childhood all around the world until his family settled in the Northern Virginia area. He studied with Dr. Wanchi Huang at James Madison University and received a BM in Music Industry in 2009.  Immediately following, he was accepted to Michigan State University where he studied under I-Fu Wang and received his MM in Violin Performance in 2011.  Masterclasses have included members of the National Symphony in Washington D.C., world-renowned violinists Max Rabinovitsj and Ilya Kaler, and award-winning groups the Shanghai and Cypress String Quartets.

Recently, Jake has been in demand in a variety of musical pursuits. As a performer, he has performed solo, chamber, and orchestral repertoire all over the world.  Some of the groups he has played with include his role as Assistant Concertmaster of the Waynesboro Symphony since 2015, the Fairfax, Roanoke, Charlottesville, and Lansing Symphonies, as well as Heritage Theatre Festival, Opera on the James, and Ash Lawn Opera Orchestras. Jake was previously a member of the faculty of the Bay View Music Festival in Michigan, teaching and coaching chamber music during the summer, and is currently an Adjunct Faculty member at James Madison University as well as Interim Instructor at Eastern Mennonite University in Harrisonburg, VA.

Committed to educating the next generation of musicians, Jake maintains private students in Charlottesville, VA that regularly excel in local competitions and youth orchestra auditions. As adjunct faculty at James Madison University in Harrisonburg, VA, Jake is commited to preparing violinists for the rigors of a career in music.

As an administrator, Jake has interned with the Fairfax Symphony Orchestra, and served as Artistic Coordinator at the Heifetz International Music Institute in 2014.

As a member of The Triforce Quartet, Jake has had the great opportunity to combine his passion for video games and music. The Quartet has performed all over the US as well as internationally, including a performance at the US Ambassador’s residence in Dublin, Ireland, Benaroya Hall in Seattle, and the Smithsonian Museum in D.C. They released their first album, The Legend of…, in August 2014, and released their second album, Ultima Phantasia, in August 2016. Triforce has also been featured on Japanese composer Saori Kobayashi's Panzer Dragoon 25th Anniversary album: Resurrection.

Jake plays piano in his spare time, as well as viola. Outside of music, Jake also loves video games, dogs, going to the gym, and a good cup of coffee.